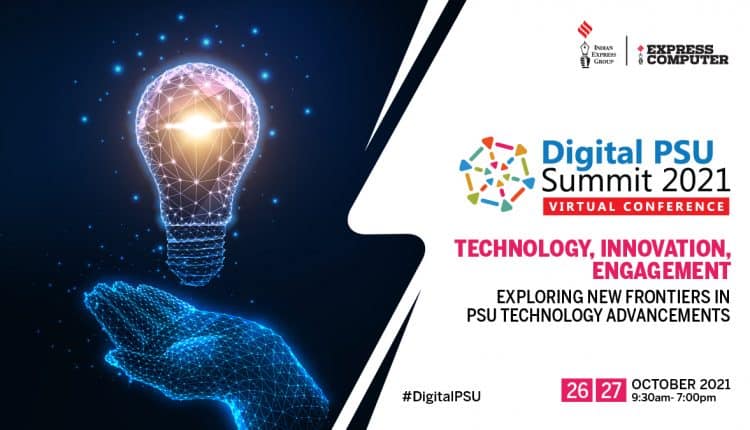 India’s PSUs have been at the forefront of nation-building, and are also leading the way in digital transformation by undertaking countless digital initiatives. Considering the remarkable achievements of a number of Public Sector Undertakings in India, Express Computer (a part of Indian Express Group) had organised a special ‘Digital PSU Summit’ in a virtual mode on 26th and 27th of October, 2021 that celebrated, honoured and documented the achievements of Public Sector moguls. We also recognised leading power utilities for their innovative use of technology.

The first day of the Digital PSU summit began with a keynote address by Puneet Chawla, the Chairman and Managing Director, Railtel Corporation of India, who spoke on, ‘How Digital has put RailTel Corp on the high speed growth track’. Chawla said, “RailTel has become the largest neutral telecom infrastructure and ICT provider of the country with city  access network of 18000 + route kilometres including in the North East States and J&K; the subscribers to our RailTel broadband service has now touched 4.2 lakhs, it has just increased by four times in 18 months.” He further added that the Government of India is focusing on digitalisation, for which it has launched a Digital India programme. He said, “Railtel has successfully carved a niche as one of the most trusted partner for digital transformation, not only for the railways but also for many other sectors such as coal, defence, n banking etc”.

The next speaker was Gautam Ghosal, Manager, Solution Engineering, F5 Networks, who spoke on, ‘Race to Cloud with Seatbelts’. In his talk, he said, “Cloud is the breeding ground for innovations and new technologies such as containerisation, Big Data and Artificial Intelligence and organisations cannot afford to ignore the cloud anymore, it’s become inevitable. The Covid-19 pandemic has not only accelerated the cloud adoption but also encouraged the attackers to exploit new types of threats.  Over 73 per cent of organisations report that their concern about the security of apps in the cloud is holding them back in adopting to cloud technology.”

The summit moved ahead with a special address titled, ‘BBNL: Towards a pursuit of delivering ‘Fibre to All’ where Sarvesh Singh, the Chairman and Managing Director of Bharat Broadband Network Ltd  (BBNL) spoke about his company’s achievements and visions ahead. He said, “Broadband access in the country is no more a luxury. It is a powerful tool in delivering essential services, e-Governance, telemedicine, e-Education, e-Banking etc.” He added, “BHARATNET is trying to bridge the digital divide between rural and urban India through our fibre network. We have constructed 5.5 lakhs kilometres of fibre and connected more than 1.69 lakhs gram panchayats in India. And now we look forward to connecting the villages to go beyond the reach of gram panchayats.”

Later in the summit, Brijesh Miglani, Sr. Cyber Security Strategist, spoke on the topic of, ‘Securing Access and Data with Zero Trust Approach’. In his talk, he said, “The public sectors are typically the economy builders for a country.” He emphasised that digital transformation helps in process simplification and is the driving network and security traffic changes. Miglani further added, “Data is always at the centre point; the focus should be on how to secure it and how to use it for the benefit of citizens of India.”

Ajay Gupta said, “Before the pandemic we shifted our SAP in-house data centre to cloud centre, which helped us in maintaining our business continuity.” Sanjay Kumar Suri added another key point, “According to me, People, Process and Technology are the main aspects for any organisation to go full throttle with efficient digital transformation.”

Vikas Sharma mentioned, “The IT field has been democratised in its most pluralistic sense, and now most people are directly and indirectly a part of it.”

“Transformation is the need of the hour; most companies are thinking about how they can enable their application to become more accessible to its users with ease and utmost security. And a majority of organisations have started to acknowledge that people can work in hybrid mode,” said Ananth Nag.

He said, “Technology is the cornerstone of BPCL and we are very aggressive in using all the emerging and pioneering technology in our line of work. He also shared some enlightening words by his senior colleague and chairman of BPCL, saying, “Never look for perfection, is the motto that we follow. So instead of wasting time in publicity, we must invest more time in testing the quality of products that we have launched.”

The first day of the Digital PSU Summit came to an end with the awards ceremony. The team of Express Computer felicitated the award winners, from the PSUs for their excellent contribution in demonstrating innovative use of a particular technology or a combination of technologies. This includes deploying a completely new solution or an innovative use of an existing technology to gain a competitive edge, improve operations, or to gain competitive and improved operations. The list of the award winners is as following:

The second day (October 27, 2021) of the Digital PSU virtual summit started with a keynote address by Vinay Kumar Singh, Managing Director of National Capital Region Transport Corporation (NCRTC), who spoke on the topic titled, ‘Using technology to reimagine mass transportation systems: Learnings from NCRTC’. Singh said, “We have to think twice before taking up a Capital Intensive Project. And the most important part while implementing a project, is to identify the risks involved.”

He further added, “With the help of technology we can expedite the completion period within the given time frame and with utmost efficiency.”

Next on the agenda was a talk by Sudip Banerjee, Senior Director, for Transformation Strategy – APJ, Zscaler. He spoke on the topic titled, ‘Modernize Indian public sector with Zscaler Zero Trust Exchange’. He said, “Technology gets updated regularly, so it is disruptive in nature.”

He further mentioned, “Cloud protection is one of the priorities of recent times. And our mission is to make the cloud a safe space to do business and enjoyable for its users. “

The summit moved ahead with a special address titled, ‘WEBEL: Towards a digitally empowered West Bengal,’ which saw Samar Jha, Chairman of West Bengal Electronics Industry Development Corporation Limited (WEBEL), highlight the milestones achieved by his company. He said,” WEBEL was created to promote the electronics industry in West Bengal. It was one of the first companies in India to manufacture black & white TVs, and that is how they became popular. West Bengal has been ranked the number one state for regular and quality power supply; as a result of which we have been able to attract mammoth sized IT companies into the state.”

Next was another special address titled, ‘Innovations driving the digital transformation approach of HPCL’, by Rajiv Chandra, Executive Director of Information Systems, Hindustan Petroleum Corporation Limited (HPCL), who said, “As PSUs it is our responsibility to meet the essential societal needs and also the desire to thrive as successful businesses.”

He further added, “Engaging with startups brings in fresh ideas into the company and it keeps us well positioned to handle any disruptions.”

The Summit progressed further with a fireside chat on, ‘Role of Automation in improving the efficiency of IOCL,” with Alok Khanna, Executive Director, Strategic (Information Systems), Indian Oil Corporation Ltd. (IOCL), who said, “Transformational technologies, also known as Industry 4.0 Technologies have been taking the businesses by storm. And we started implementing the digital transformation and its tools from 2019, with 80 Digital Initiatives to be implemented across the corporation.”  He pointed out that technology is going to play a vital role in the evolution of digital business models.

Some of the key points spoken by each one of them were: “There has been an increase in adoption of IOT Technology in the Public Sector,” said Gobind Khattar. Poonam Chum stated, “ IT departments in PSUs are nowadays opting for hybrid Models.” She also spoke about her company’s achievement in implementing the Government Subsidy Project on Fertilizers, DBT (Direct Benefit Transfer). “Technologies such as IOT, AI, Mi, Blockchain and Automation have helped in driving sustained growth in the public sector,” mentioned Sudipta Basu.

Prem Kumar Jha averred, “We just cannot depend entirely on outsourced resources, we need to have proper emphasis on our internal teams, as they know the real challenges.”

Some of the key points laid down by each one of them were:

Dr Yask Sharma, stated that everything on the cloud is about code; Kuldeep Singh said that Zero Trust is not a technology solution, but rather a framework, while Sanjeev Tyagi asserted that bot traffic needs to be analysed properly, as it is a major threat to the organisation and its data; Dipesh Jain added that every click on the web is like a signature; so one needs to be very careful.

N Raman commented, “The ransomware and phishing attacks are of primary concern nowadays.” He also warned people and organisations by saying that just by having a firewall installed, does not ensure complete protection.

The two-day long Digital PSU Summit virtual event came to an end with the award ceremony to felicitate and celebrate the technological advancements by various government departments to benefit the citizens. The list of the winners is as following: