Madrasa uses apps and gadgets to educate the poor 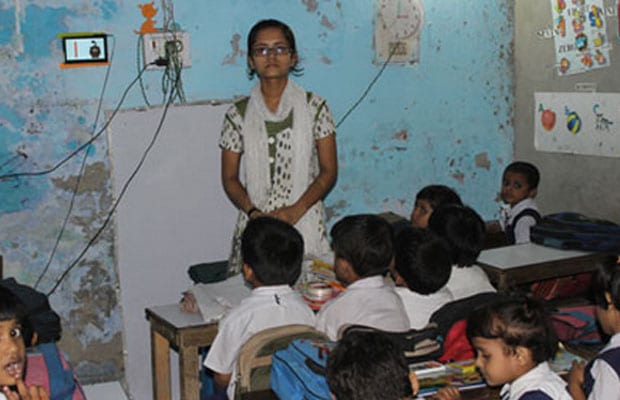 A tab has been fixed to a wall with its green paint peeling off at many places. As the alphabet song starts to play on the tab , a group of small children try to sing along. In the next room, the same activity is going on, albeit with the help of a laptop.

Across the corridor, in another room, a group of teenagers are holding formal elections for the post of class monitor. The candidates have put up handmade posters on the walls announcing their agenda for fellow students if they get elected. There is also a “returning officer” to keep a check on poll proceedings.

This is a regular feature at Babul Uloom Public School located in East Delhi’s one of the poorest neighbourhoods, Seelampur. The building is in shambles – cracks are evident on the walls, the doors creek, the carpets on which students sit are tattered, and the furniture is broken. But the ideas here are all fresh and new.

It was in 2012 that some volunteers came across Babul Uloom madrasa, which has stood here for almost a decade, imparting basic language skills and theological lessons to as many as 600 boys from the vicinity. For the children of thousands of families living here, there was no formal school nearby – neither government-funded nor private. Across the road from the madrassa, people in Janta Mazdoor Colony – one of the many unauthorised colonies in Delhi – are busy with the problems of poverty, low life expectancy and substance abuse. Educating their children is least of their concerns.

Realising the peculiar predicament that the children in the area were in, the volunteers enrolled a bunch of 150 willing students, including girls, from the madrassa and Janta Mazdoor Colony and started teaching them basic English and Maths for three hours every day. They converted an adjacent building, which also belonged to the madrassa, into an evening school.
Babul-uloom Public School formally opened its doors almost an year ago, with a simple founding principle – co-education and secularism.

Sajid Hasan, in his early 30s, a banker from a middle-class family, who quit his job to devote his life to change the face of madrasa education, says, “this is a predominantly Muslim, poor locality where most families are engaged in the denim industry or assembling electronics. Since they had not gone to school ever before, children here have fewer learning skills. This made us come up with these innovative teaching methods. Also, it became a compulsion since their parents couldn’t afford textbooks.”

Luckily for Hasan, who is now the school principal, they were offered a huge helping hand in the implemention of innovative methodology. STIR Education, a Delhi-based organisation that helps schools across India in researching and implementing small and inexpensive changes, came on board.

Sharath Jeevan, CEO, STIR Education, says, “When we went to visit the school, we were impressed both by the level of innovation and commitment of Sajid and the teachers. We invited him to apply for the programme and they were successful.”

In just a year and a half of its existence, the school has managed to bring about dramatic improvements in the learning outcomes of students. Hasan adds, “Since their parents can spare no resources in terms of notebooks, textbooks or stationery, the best we could think of was to install the alphabet app on their parents’ cellphones. That helps them in revision at home.”

Teachers film the classroom sessions using their own cellphones and view them later to assess and better their own performance. On this, Jeevan says, “We wanted to get the teachers to take themselves more seriously as professionals, but without any external monitoring.”

Sitting on a broken chair in the verandah outside the classrooms, on the first floor, which acts as “principal’s office”, Hasan says, “We have no affiliation or money as of now. There are about 200 students of all age and income groups and several teachers who come to the school everyday.”

He claims that the dropout rate is almost nil. They charge a fee of Rs 120 a month from students so that parents remain motivated to send the kids to school so as to derive value out of their hard-earned money. “But if a family can’t afford it, we waive it off,” says Hasan.

Hasan adds that the project is at a strategic turning point. “We have realised that working collaboratively with madrasas can create change.

This is our pilot model, and its success has buoyed us. In the next five years, we will open seven more madrasa schools in Delhi, Haryana and Uttar Pradesh – they will all be co-ed and secular,” he says.

Coming soon: What to expect from Axis Bank’s digital kitty