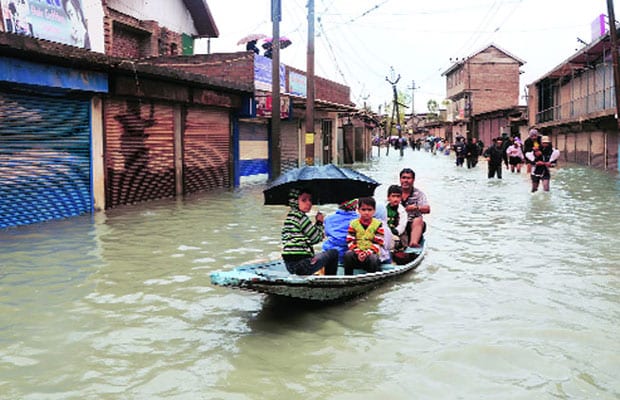 In a unique project, the UP State irrigation department is using cloud technology from the German enterprise software maker SAP, to properly monitor, analyse and forecast flood situations in the state

In recent past India has witnessed some of the worst natural disasters, most frequent among them have been floods.

The catastrophe of June 2013 Uttarakhand flood, incessant rain and flash flood of Jammu & Kashmir in September 2014 and the paltry dole given by governments in the name of compensations are still making the headlines.

If the technology has its way into the existing flood management mechanism which primarily focus on  rescue and relief  during and after flood, there could be substantial improvement in the early warning system leading to better management of flood and saving of lives. SAP, the $20-billion German enterprise software maker is working with one of its Bangalore based partner Arteria Technologies to enable UP State Irrigation Department to properly monitor, analyse and forecast flood situations with SAP’s HANA Cloud Platform.

Traditionally, on the basis of water level at different locations, the government has been predicting the possibility of the flood. However, floods in Jammu & Kashmir and Uttarakhand have proven that in addition to water level or rain, the moisture content and movement of the cloud also play its role.

One among the government’s key priorities has been to improve the early forecasting of the flood so that it could have ample time to put measures in place for evacuation, saving the life of animal, cattle and people. And, with the financial assistance from World Bank, the government of Uttar Pradesh is aiming to use the predictive analytics to manage reservoirs, dams, canals and forecast flood situations. While some of the tools have been used by the state’s irrigation department for some time now under Hydrology Project Phase-I and Hydrology Project Phase-II guidelines, using cloud platform for getting the exact picture of weather with 95% accuracy and 2-3 week in advance is something new.

Is the water level in major river basins below the danger mark? Is there any leakage in the dam? What is the cloud density and its movement? Are the canal networks operating normally? If there is likelihood of over flow of water or leakage, can it be fixed? To address these questions, Arteria Technologies has come up with the solution called Arteria Flood Real-time Monitoring (FoRM) which uses SAP HANA Cloud platform to consolidate the sensor data from various sites such as reservoirs, dams, canals for monitoring in real time with the help of a central dashboard using maps.

In February 2015, Arteria did a pilot project in UP. It has placed sensor devices at different points in the river basins to collect the data. Sriram Kanuri, CEO, Arteria Technologies informs that sensor data from four major river basins across 1,000 sensor points is collected into SCADA servers and pulled into HANA platform in every five minutes.

Automatic alert notifications are calculated in case of a threshold breach and predictive algorithms are used to forecast a flood situation based parameters such as rainfall, water level and discharge levels.

Over the years, the UP government and World Bank have been trying to put in place a specialised Flood Management Information System (FMIS) as more than 30% of the total geographical area in 23 districts of UP is flood-prone and UP has river basins and canal networks which is almost equal to entire USA canal network. On the other hand, SAP has increased it focus towards India. The company is investing in start-ups and its HANA platform has seen traction in government, telecom, media & entertainment, sports verticals.

“The idea is to equip canals and the dams with sensors so that whenever there is overflow, leakage and risk of flood, people can be alerted. In the second phase, we plan to build an auto-monitor tool to fix small problems automatically,” Bernd Leukert, member of the Executive Board of SAP SE, Products & Innovation, told FE.

Technology is now an inextricable part of the system, going forward, we are likely to see more of it.