Yotta successfully concluded the maiden edition of Yotta CIO Run, a first-of-its-kind marathon curated exclusively for CIOs and their families. Hosted at Yotta NM1 Data Center at Hiranandani Fortune City, Panvel, on May 01, the event witnessed the participation of 150+ CIOs and their families.  With the objective of celebrating the health and wellbeing of the CIO fraternity, which may often get neglected in a fast-paced digital world, the event featured 3 km, 7 km and 10 km marathon routes nestled amidst the green vistas at Hiranandani Fortune City. CIOs and their families were greeted with an energising pre-run Zumba session, healthy and sumptuous breakfast, and a host of post-run fun activities and games, followed by a Yotta NM1 Data Center tour.

Sunil Gupta, Co-founder & CEO of Yotta, says, “CIOs are at the helm of digital transformation, keeping pace with emerging trends and responding to them with innovations. Yotta CIO Run is a step towards the holistic wellbeing of this community of digital leaders and our gratitude for their role in India’s digital enablement. It was great to witness enthusiastic participation from India’s leading CIOs and their families. We look forward to continued engagements with them through platforms like this.”

Commenting on the initiative, Kapil Mehrotra, Founder of Reefit CXOs Wellness and Group Chief Technical Officer, National Commodities Management Services says, “As we relentlessly pursue digital and cyber security goals, our health and wellness often takes a backseat. Yotta’s emphasis on promoting a healthier lifestyle for CXOs at work is aligned with Reefit’s core objective, so joining forces with Yotta for this initiative was the best decision as part of our efforts towards a fitter version of ourselves and giving back the same experience to the CIOs community and their families.” 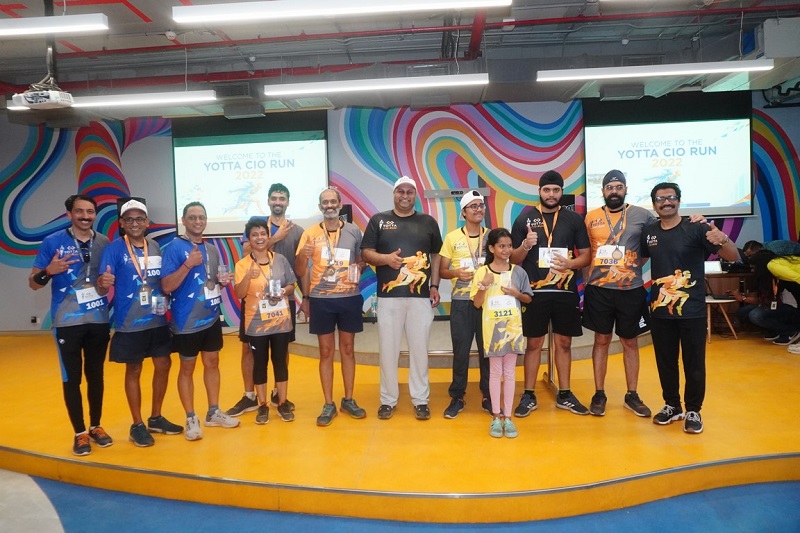 The event was well-received by the participants, who applauded this unique initiative by Yotta. Austin Gomes, Group Head – IT Infrastructure & Security, Thomas Cook India shares, “We were thrilled to be part of the Yotta CIO Run. My kids had loads of fun and we truly enjoyed our time at this event. Thanks to the Yotta team for organising this. We look forward to participating in many more Yotta’s events like this.”

Alok Sood, GM – Information Systems, Percept Ltd says, “I participated in Yotta CIO Run along with my son, and we were both charged up for this run. It was a lovely event and well organised; all arrangements were superb. I would definitely love be part of more such events by Yotta. All the best to the entire Yotta team.”

Gartner’s 7 top trends in Cybersecurity for 2022