Home  »  Artificial Intelligence (AI)  »  The power of Big Data, analytics and AI in the fight against Covid-19

The power of Big Data, analytics and AI in the fight against Covid-19

Odisha IT Secretary says emerging technologies have helped the state in preparation and execution of strings of decisions including setting up of a 1,000 bed Covid hospital, providing data to the health department by using IT and maintaining Covid-19 dashboard. Chhattisgarh Health Secretary believes IT was significant for training people to handle the contact and command centre. Similarly, Madhya Pradesh NHM Additional Mission Director informs that prediction tools were widely used to predict Covid-19 peak in districts. Chhattisgarh Infotech Promotion Society’s COO says Big Data enabled the Chhattisgarh government to provide very specific data to the district administration heads 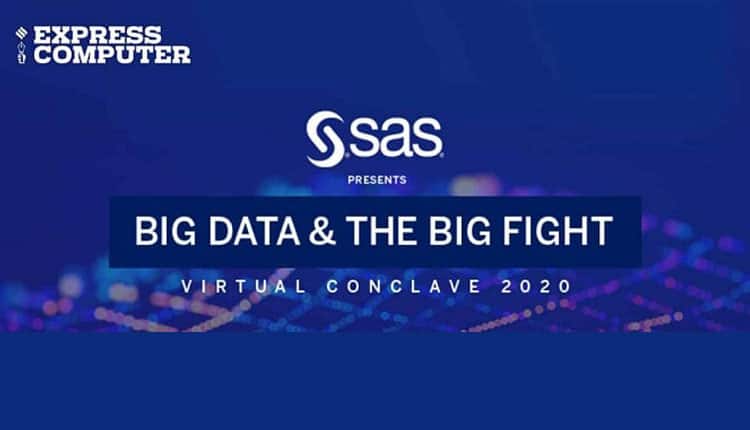 While delivering a Keynote Speech at “Big Data and the Big Fight” west zone webinar organised by Express Computer and SAS on July 31, 2020, Manoj Kumar Mishra, Secretary, Department of Electronics and IT, Government of Odisha said that Big Data, AI, data analytics have been used to detect public movement in Odisha, which has reaped benefits to the government.

He mentioned the major boon of IT was in enabling the health department by providing data to track and monitor Covid patients. Mishra said drones are being used to check infringement of containment zones, adding, that the announcement of financial incentive for people with travel history to register themselves curtailed Covid spread in Odisha.

Mishra pointed out that the Covid-19 Dashboard has received accolades from Stanford University for its transparency and data security and it is one of the best dashboards in the country at present.

Mishra reminded that Odisha reported its first case in March when Europe and parts of Iran were badly affected by the pandemic and from that period Odisha government came up with incentivisation for people to declare their travel history. The role of the government is to predict the future and introduce a framework to deal with it. Odisha was the first state to have an exclusive 1,000 bed Covid-19 hospital, Mishra remarked. “Many students came back to the state from abroad and similarly the labourers working in the Middle East countries started returning to the state. They were the potential spreaders. It was the need of the hour to encourage people to reveal their travel history. That was the farsightedness of Odisha Chief Minister Naveen Patnaik that helped us to track such people. We took control of the situation in the early stages,” the IT Secretary said.

He also talked about the Central Repository System commonly known as Social Protection Delivery Platform under the 5T program, which aims to reengineer the government processes. “The CM had said in his speech that he did not want to see public coming to government offices to get the services. It is the people who should get citizen services at their doorsteps. It has never been a pleasant experience for citizens to visit government offices be it for any reason. The government is successfully trying to make every citizen service online as quickly as possible despite the challenges posed by the pandemic,” he said.

Niharika Barik Singh, Secretary, Department of Health and Family Welfare, Government of Chhattisgarh shared her experience of tackling the pandemic in Chhattisgarh. She said that the first focus was on training the medics and emerging technologies were extremely helpful; especially with online training.

Singh added that IT was significant for training people to handle the contact and command centre. Tele-medicine and tele-consultation was being very useful during the pandemic, she acknowledged.

She also talked about the e-pass system whose introduction gave visibility to the migration happening in the state and helped in containing the spread.

“Analysing past data to understand which pockets of the society generally gets affected with diseases, was very helpful,” she stated.

Sidana concurred that technology aided the NHM immensely to identify and prepare strategies to handle the pandemic in the state. She said prediction tools were widely used to predict Covid-19 peak in districts and accordingly medical arrangements were made.

She shared that NHM will continue with virtual training and peer-to-peer learning in the pandemic.

Prabhat Malik, COO, Chhattisgarh Infotech Promotion Society, Department of IT, Government of Chhattisgarh underlined the importance and usage of Big Data. He said the quantum of data is huge, but Big Data enabled the Chhattisgarh government to provide very specific data to the district administration heads.

“With analytics we could assess the spike in the districts and arrange for the medical infrastructure including PPEs, beds, medicine etc. Data from various districts is helping us to develop tools to fight the pandemic,” Malik said.

He said SAS analytics was used to generate actionable intelligence for government decision making and it helped many governments to fight the pandemic effectively.

“For Social Benefits Emergency Delivery scheme we came up with quick analytics to mitigate abuse of the scheme,” he said, adding that data availability, quality, accuracy and speed of collecting data has been very significant in Covid-19.

Notably, the South zone webinar of the “Big Data and the Big Fight” webinar will be held on August 6, 2020.

Personalized medicine complemented by AI/ML has the potential to revolutionise…