In 2019, several landmark announcements were made with respect to the data centre space in India 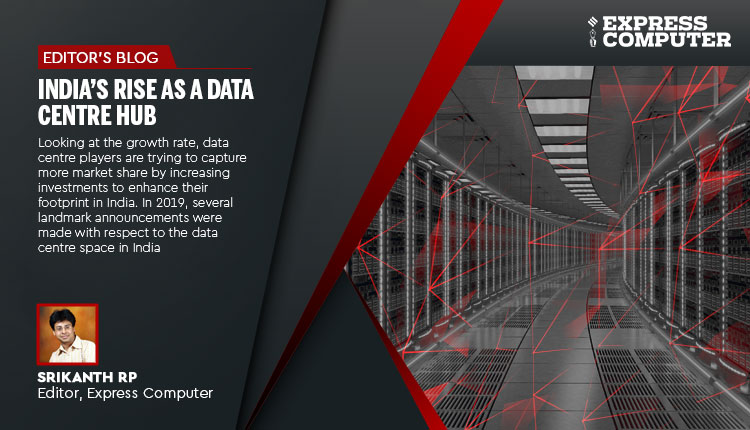 India Inc is in the midst of a huge digital transformation drive. From the way the government interacts with common citizens to the way the latter consume services, everything has a touch of digital. When you correlate this data with the fact that India has one of the youngest populations in the world, then we can safely contend that India will remain a rising market in terms of data consumption. Digital data consumption in India is expected to increase at twice as fast as the worldwide rate from being 40,000 petabytes in 2010 to 2.3 billion petabytes by 2020 (Source: IAMAI).

In addition, compliance requirements set by regulatory authorities such as RBI that mandate that personal data of Indian citizens must be stored on local servers in the country, has helped in boosting data centre capacity. India is also home to the third-largest ecosystem for startups in the world. India also continues to a software services superpower and manages global IT infrastructure remotely from sophisticated data centres in the country. India is set to overtake the US by 2023 with respect to having the largest population of developers, (Source: Evans Data’s Global Developer Population and Demographics Study).

Looking at the growth rate, data centre players are trying to capture more market share by increasing investments to enhance their footprint in India. In 2019, several landmark announcements were made with respect to the data centre space in India.

The Hiranandani Group ventured into the data centre business by announcing that it was looking to build data centre parks across India. Similarly, CtrlS announced that it was looking to add 5 million square feet from the existing 1 million square feet by 2021. The Adani group announced a partnership with San Francisco-based Digital Realty to jointly develop and operate data centres. Oracle Corp opened its first local data centre facility in India. Microsoft announced a 10 year partnership with Reliance Jio to launch new cloud data centres in India. Amazon Web Services also announced last year, its intention to include a third availability zone. Most recently, Japanese tech giant, NTT announced that a significant percentage of its US$ 7 billion global commitment for its data centre business would be spent in India over the next four years.

Understanding the importance of a good digital infrastructure in powering national growth, the government recently proposed to bring a policy that would encourage the private sector to build data centre parts throughout the country. While the demand was already high, this could just be the trigger to unleash a fresh wave of foreign investments in data centres in the country.