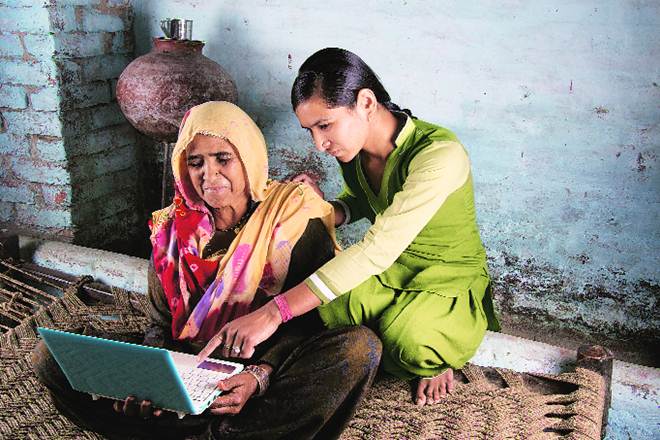 Indian villages moving along the IT stream using mobile apps for rural development is a reality now. ‘Smart’ is part of their lexicon now, with each letter denoting new aspirations: ‘S’ for social security schemes, ‘M’ for modern urban amenities, ‘A’ for adoption of smart agriculture practices, ‘R’ for roads infrastructure and transportation and ‘T’ for tech-savvy, and the smartphone is helping bridge the rural-urban divide. Due to it, mobile apps are acting as platforms for social and behavioral changes among the rural population. Be it agriculture, health, education or availing any government services, mobile apps have touched almost every aspect of rural development and continue to be the harbringer of change in rural India.

In Uttar Pradesh, two IT professionals, with a dream to transform the lives of thousands in rural India, have developed an app called ‘SmartGaon’, that not only connects an entire village population internally and with the developed world, but also serves as a knowledge and information centre, a marketplace, a helpline and a holistic development tool to make their village a smart village. Yogesh Sahu, a Mumbai-based young entrepreneur delivering IT solutions to small and medium businesses, along with his friend Rajnish Bajpai, a software professional working abroad, had together envisaged creating a transformation in rural India, using mobile technology and Internet of Things.

And the results are visible. Taudhakpur, a remote village with limited amenities in Raebareli, Uttar Pradesh, is now developing at the speed of light. Within a span of 48 hours, the village has built 242 toilets, the highest in the state of UP. From setting up CCTV cameras, public address systems, dustbins and streetlights at various junctions, this village is getting smarter by the day. The village has a Wi-Fi zone in addition to 18-20 hours of power supply. All of this has been achieved due to a vision, which transcended into a mobile app called SmartGaon, wherein all initiatives undertaken are updated, recorded, tracked and monitored, ensuring free flow of information and community well-being.

“SmartGaon is a non-profit app built for the betterment of quality of life of the people living in the rural areas. It is a B2C model where the business is only for the consumer,” says Sahu, who received a letter of appreciation from the gram panchayat and the Gram Pradhan of Taudhakpur. “The USP of the app is that it covers all the aspects of developing a village, from setting up school infrastructure, digitalisation, helping farmers list their produce cutting out the middlemen, to building toilets and setting up CCTV cameras in the village.”

Although rural India faces innumerable challenges—frequent power outages, scarcity of safe drinking water, poor farm productivity, difficulty in transporting farm produce to the markets and poor education facilities, et al, digital technology coupled with a vision can engineer a revolution. Developing mobile apps for start-ups and SMEs, Sahu evaluated the power that the mobile phone gave ordinary citizens, especially rural Indians. Incorporating these learnings in the SmartGaon app, he ensured that the app had key features like the villagers’ directory, news and events calendar, health centre, information centre, etc., in English as well as Hindi. The goal was to reconstruct Indian villages such that people can lead a invigorating and fulfilling life in them, as in the cities.

Sahu says that the main trigger for developing the app was Prime Minister Narendra Modi’s speech at San Jose SAP centre where he spoke on how to stop brain drain in the country and bring brain gain leading to brain deposit. Enthused by the speech, Sahu and Bajpai brainstormed on various social improvement ideas and then came up with the SmartGaon idea. “We wish to transform 10 more villages in the next two years. We already have one village where activities have been initiated. The next step is to spread awareness amongst urban citizens, NRIs and corporates to come forward and support this cause,” says Sahu, adding that the next stop for the SmartGaon app is Maharashtra.