Digital Technology Sabha witnesses participation of eminent speakers across the country and abroad in the midst of Covid-19 pandemic. The luminaries included Minister of State for IT, Secretary MeitY, DG, NIC and IT Secretaries of different states among others emphasise on the need of proactive use of modern tech tools to roll out services uninterruptedly, despite severe challenges thrown by the global pandemic. 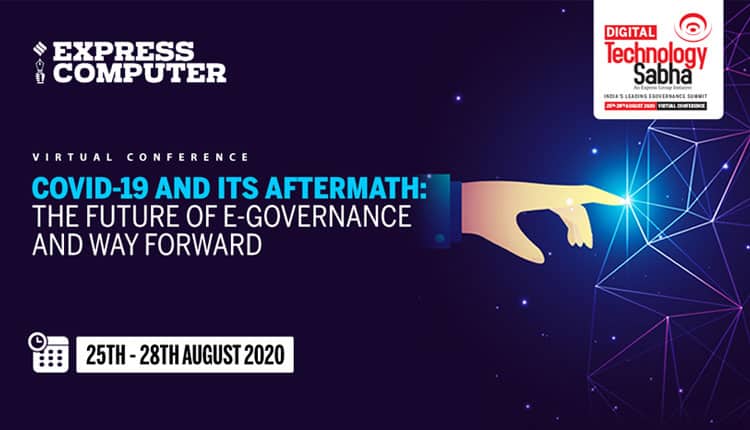 Sanjay Dhotre, Union Minister of State for Electronics and Information Technology has said the Centre’s collaboration with major private technology players has further strengthened the vision of Digital India and it has placed India in a better position globally.

Dhotre was addressing the audience in the recently concluded Digital Technology Sabha 2020, themed around, ‘Covid-19 and its aftermath: The future of e-governance and way forward’ held from August 25 to 28, 2020.

He said that the core vision of Digital India is divided into three broad aspects – digital infrastructure, governance and services on demand. He informed that after the Prime Minister Narendra Modi’s call for Atmanirbhar Bharat or self reliant India, the manufacturing of N95 Mask, ventilators and vaccines initiatives has gone up.

He said the launch of Arogya Setu App was one of the big steps taken by the Centre.

Adding to this, AP Sawhney, Secretary, Ministry of Electronics and Information Technology said that the number of UPI transactions has overtaken all other modes of digital payments and the GSTN has resulted in tremendous simplification of the taxation system.

Sawhney said that it is the apt time to move on to a National Public Digital Platform. He said 2020 would be a game changing year for India’s digital initiatives.

Dr. Neeta Verma, Director General, National Informatics Centre (NIC) concurred with the fact that the underlying foundation for all initiatives is the robust ICT infrastructure put in place by the Centre.

She said Aarogya Setu app is used by over 15 crore citizens today.

Manoj Kumar Mishra, Secretary, Department of Electronics and IT, Government of Odisha said that the stpate government has tied up with industry stakeholders to find out the right solutions. He said the government has seen renewed respect for governance.

“Odisha government has onboarded Smart Analytics and utilised the large pool of data in the midst of Covid-19,” he said.

Meanwhile, in a fireside chat with Dhotre, Som Satsangi, Managing Director, HPE stated that in last four years the company has seen humongous digital transformation in India and HPE played key roles in providing storage and compute in states’ eGov projects across the board. During pandemic, HPE has launched four OPDs and four test labs in four states, Satsangi informed.

Ashwani Chandhok, Senior Director, Platform Cloud Solutions – Oracle Asia Pacific mentioned that in times like this, the continuity of services is tested and technology provides the building blocks for creation of government services.

Munish Ghai, Head of Government Sales, Data Center Solutions, Dell Technologies said that the pandemic has necessitated the requirement of digital transformation. He said simplification of security strategies is key to effectiveness.

Dr. Rohini Srivathsa, National Technology Officer, Microsoft India highlighted that remote access and collaboration are important aspects of where the people are heading.

“One of the trends during the Covid-19 era has been delivery of services through AI powered apps,” she said.

Alain Sanchez, EMEA CISO, Senior Evangelist, Fortinet said the core of 5G is the mosaic of various attractive services. Sanchez said AI helps in understanding behaviour of users and entities and it has to be integrated in a holistic approach.

In a panel discussion titled, “The role of ICT in overcoming challenges during Covid19 and the road ahead”, Jayesh Ranjan, Principal Secretary, Department of Industries and Information Technology, Government of Telangana said that Covid-19 has not pushed the state back and Telangana continued to implement key IT projects.

SVR Srinivas, Principal Secretary, Information Technology, Government of Maharashtra informed that the Maha Parwana platform will facilitate investments and ease of doing business in the state.

Ajay Chagti, Special Secretary, Department of IT, Government of NCT of Delhi said that to test, trace, track and treat, technology has supported all four aspects of the government’s Covid response.

Sanjay Kumar Das, Joint Secretary, Department of IT and Electronics, Government of West Bengal said that the government has developed several applications in a versatile manner to tackle the pandemic.

He said his platform supports 45 million active devices in a day.

In a fireside chat, J Satyanarayana, Chairman, National Digital Health Blueprint (NDHB) Committee, said that a digital foundation based on standards is a must and efforts have to be taken in a public-private partnership mode.

Kamal Arora, Senior Director, Sales, Dell Technologies mentioned that Dell has been actively engaged in many healthcare initiatives in the country. He said healthcare sector is ripe for transformation at multiple levels.

In a panel discussion titled, “Building a resilient economy in the times of Covid-19”, Prabhat Malik, COO, Chhattisgarh Infotech Promotion Society, Government of Chhattisgarh remarked that telemedicine will be one of the biggest focus areas of the government going forward.

Manu Shukla, GM (IT), National Health Authority, Ayushman Bharat Pradhan Mantri Jan Arogya Yojana (AB PM-JAY), Government of India said that with NDHM, NHA will be providing Heath ID to all citizens which will be mapped to the entire health history.

Navtez Bal, Public Sector Lead, Microsoft India said that the next phase will be about recovering and reimagining.

S.V. Srinivas Rao, Chief General Manager (IT), EOC, NTPC said the corporation has not faced a single IT security breach during the pandemic.

BV Subramaniyam, Director, (e-Gov), Department of IT, Electronics and Communications, Government of Telangana informed that the government has created a vast startup pool, which helps us leverage technology in a better manner.

In yet another panel discussion on “The role of emerging technologies in building Smart Cities”, Arun Bothra, MD, Capital Region Urban Transport and CMD, Odisha State Road Transport Corporation, Government of Odisha said that Odisha government is creating awareness among people and assuring them of safety.

Kamal Kashyap, Director Public Sector Sales, HPE added that Smart Cities are on a maturity curve and they have a rich amount of data.

Brijesh Miglani, Technical Head, Forcepoint said that there is a need to understand data security and mitigation with a new approach and behaviour analytics needs to be in place.

Shailesh Kumar, Director, Channel & Alliance, Enterprise DB said that many organisations have embraced open source as part of the change and that open source in government can enable ‘Government as a Platform’.

Mohan Bhat, MD & Co-Founder, Accops affirmed that the new normal must ensure that businesses must continue as usual regardless of the crisis.  Accops is among the forerunners to address WFH challenges and it enables secure access to business anytime, anywhere, he said.

“We devised a system which allowed us to disburse withdrawals within 72 hours, which earlier took around 20 days,” he said.

In a panel discussion on adoption of emerging tech tools in the times of Covid-19 and how technology became an enabler to fight against coronavirus, Ramkumar S, Mission Director (MD), National Health Mission, Government of Meghalaya said that data singularity is very important for Meghalaya government.

Ravi Shankar Shukla, MD, NHM, Government of Jharkhand said that the government is still learning from its efforts and would emerge victorious shortly.

Ajay Dubey, Channel Head (India/SAARC), Forcepoint said that the firm is able to connect its government customers with data in a secure manner.

Dr. Viduthalai Virumbi Balagurusamy, Health Officer, Directorate of Public Health and Preventive Medicine, Dept of Health, Government of Tamil Nadu pointed out that the government separated the applications and datasets.

Rama Kamaraju, Senior Consultant NITI Aayog informed that Aayog has identified 112 backward districts under the Aspirational Districts Programme and it has transformed its Data Dashboard into Autonomous Data Platform with the help of Oracle’s Cloud Infrastructure and services.

Surinderpal S Kumar, CEO-APAC Region, Addteq  believed that citizens’ expectations from government services are changing rapidly. “Governance, compliance and risk management are on top of the government’s agenda,” he said.

Dr. Omkar Rai, Director General, STPI, Government of India reminded that the IT profile of India is not just confined to services; the country is also strong in R&D. India is fast becoming a software product nation, he said.

In a fireside chat, Dr. Pramod Kumar, Chairperson, Haryana Governance Reforms Authority, Government of Haryana said that the pandemic has pushed states to reconsider their basic policies. “For us, technology is a great facilitator, but not a panacea,” he added.

Narayana Birakayala, Capture Business Development Lead, AWS said that the India Enterprise Architecture provides integrated services with citizens at the centre with the help of cloud.

AWS helps the government in moving ideas to implementation, he said.

Google joins Mayo Clinic to use AI for radiotherapy planning