Home  »  Editorials  »  Can technology help in dealing with natural disasters?

Another state to look forward in terms of learning on how to cope up with natural disasters is Odisha. When a severe cyclone hit Odisha this year, the state managed to curb the number of casualties to only 64 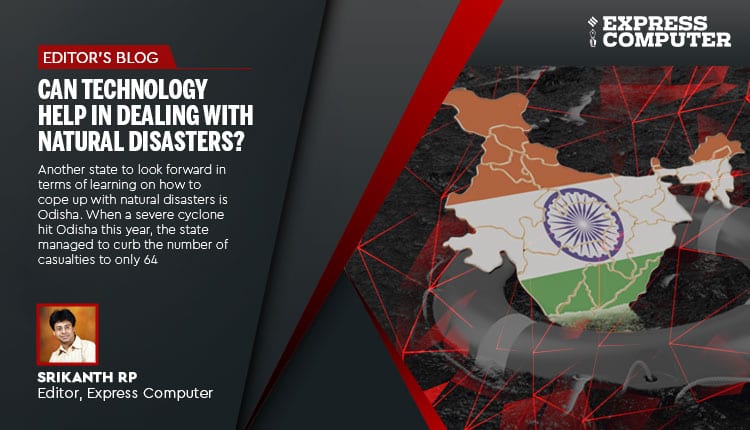 Every year during the monsoon period, India faces a deluge of floods. Almost every year, it is common to see one or two Indian states being badly affected by floods. Most recently, in Bihar, more than 1,400 villages in 15 districts were marooned due to flooding. In 2019 alone, more than 13 Indian states (Kerala, Gujarat, Karnataka, Maharashtra, Madhya Pradesh, Andhra Pradesh, Odisha) have been affected due to floods. Government reports state that this year has been witness to the heaviest monsoon rains to wreck havoc in India in the last 25 years. More than 1,600 people have been killed with millions of people losing their homes and their livelihood.

While this year has been devastating, every year, the same pattern repeats itself. According to the National Flood Commission report, around 40 million hectares of land in India is prone to floods.

India, must, and in some ways, is using technology to fight natural calamities such as floods. Take, for example, the pilot project done by Google in collaboration with the Central Water Commission, to estimate the flood level situation in Patna. Google claims that its AI-based model was used to send a map-based alert to people who lived within thousand square kilometers around Patna. The map indicated which areas were likely to get more flooded and which areas had the probability of not being flooded. Google claims that the accuracy of its model was over 90 per cent.

Another state to look forward in terms of learning on how to cope up with natural disasters is Odisha. When a severe cyclone hit Odisha this year, the state managed to curb the number of casualties to only 64.

This is a significant achievement when you look at the fact that a similar cyclone had hit Odisha about 20 years ago, claiming more than 10,00 lives.

Odisha is the first state in the country that has implemented an Early Warning Dissemination System (EWDS). Due to this early warning system, the last person at the remotest corner in the coastal area can be alerted about an impending disaster in minutes.

Odisha has also developed a citizen-centric app called SATARK that utilises a “machine learning algorithm” to self-learn from each seasonal cycle of operation, and improving on its own advisory generation process, over seasons. It is a one-stop application to predict, forecast weather information and disseminate warning on multi-hazards with user-friendly advisories.

The state of Kerala is another inspiring example. When floods hit the state in August 2018, the Kerala State IT Mission took the crowdsourcing route to create a crisis management system. The site was up and running within 12 hours of the first day of flooding. This was made possible through the contributions of techies across the globe who volunteered to code, review and recode to enhance the functionality of the platform as demanded by the needs confronting the state.

With each disaster, there are numerous lessons to be learnt. India needs to document best practices that were observed during each disaster and ensure that these are captured in the form of a knowledge management platform coupled with modern e-learning tools so that precious lives can be saved during actual disasters.