Progressing to a digital Jharkhand

Progressing to a digital Jharkhand 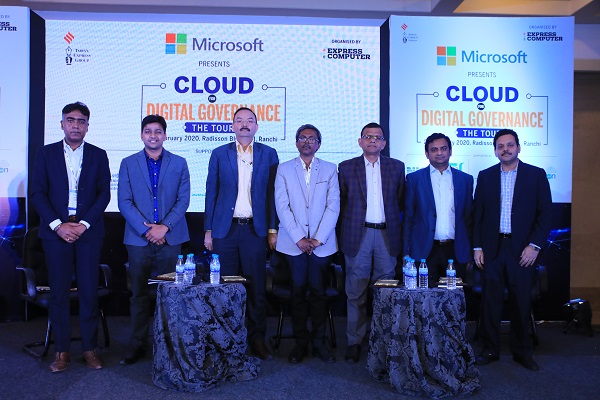 To recognise Jharkhand government’s efforts in embracing information technology and emerging technologies to simplify citizen services, Express Computer in association with Microsoft India, organised Cloud for Digital Governance: The Tour, at Ranchi, on February 20. The event also witnessed the participation of a battery of IT cardre staff of the Jharkhand government and NIC Jharkhand who came to attend Microsoft Azure 900 certification training.

“Many of us would have heard about this which has become a key topic at forums like this and it started with the World Economic Forum in Davos, coined by Klaus, four years ago. But if u think about it in terms of the changes that you see, the industrial revolution is very different from other revolutions we have seen in the past. The first revolution started with the steam engine centuries ago and the second was invention of electricity. The third in a much shorter duration started off with the invention of information technology, electronics, and semi-conductor. And the fourth revolution is the extension of the digital revolution that started with electronics but it’s very different as it brings digital, physical and biological altogether. What is does is from our biological existence it connects us into the digital world the IT world”.

Prakash cited an example as well. He said when children were playing e-games all the time, the scientists did a whole psychological and biological assessment of these children and it was found that these kids who have played e-games for a longer period have started to develop their brain and neurological connectivity in a way which is very different than what we have today in our human mankind. He said what is does for them is, they can take decisions fast and do multitasking. Such kids have very short attention deficit, he said. He said this is biological and digital coming together. At the core of this is Artificial Intelligence, IoT, genetic engineering, nano technology but the one driving force is the AI, Prakash said.

He said Microsoft as an organisation has taken huge leaps and bounds in driving the concept, agenda, technology, platform and the impact of AI in many different ways. It feels like something to do with robots, connected driver-less vehicles but that’s not really true as the AI goes beyond the realms of technology to solve the problems of today. Microsoft endeavors to go and reach out to the sustainability goals that the United Nations has in areas like poverty alleviation, climate change, farmer security and safety among others. This is not becoming a part of everything that’s being offered and done in the industry today, he adds.

Siddharth Tripathi, Commissioner, MNREGA, Department of rural development, Jharkhand government said rural development is like the elephant in the room. He said in all the third world countries including India, the governments have not been able to comprehend the rural development sector itself. “Poverty is multi-dimensional. Someone is poor because he doesn’t have a roof over his head, someone does not have good education, but unfortunately in the government to address all these issues, there are different departments and they are so separate from each other that by training and working in the field, most of us don’t understand the complexity of the poverty,” he said. He said farmers are often encountered with a lot of issues like the need for water for his fields, education for kids, healthcare-related services and potable water but unfortunately there are different people to cater to these problems. Tripathi said he was recently in Karnataka and was awestruck to see that there was a program with the help of the World Bank, farmers were getting the SMS of wind velocity when rains are going to happen. Technology does have a future and these are really going to dictate the way we are going to live in the future, he said. In my opinion, the job of the technologists is not going to be easy also because most of us are exposed to pedagogy. We know how easy is to teach a child but teaching a person at the age of 40-50 and that too in bureaucracy is very difficult. Unfortunately, the e-office project in Jharkhand is yet to take off, he said. 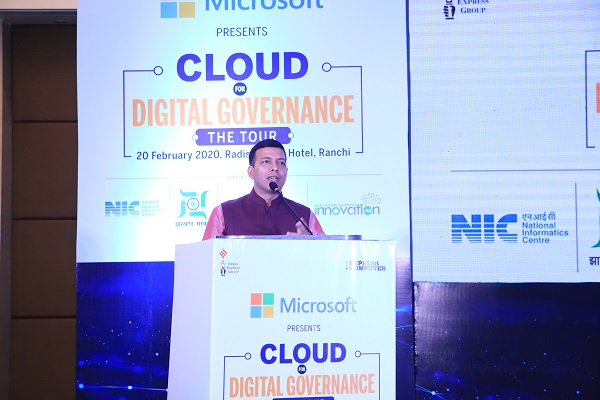 Akhilesh Jha, DIG, Jharkhand Police, Government of Jharkhand said Jharkhand has an eagerness for tech adoption and the State is willing to adopt emerging technologies. He said when we compare Ranchi with other major cities in Jharkhand, we find there is a huge gap in the capability of technology.

Jha said Jharkhand Police is successfully running the Centre’s ambitious project CCTNS which connects each police station with higher officials of the whole country. All FIRs and charge-sheets are digitised and there are plethora of forms which have been digitised, he said. He said the State Police started digitising all of its data from year 2000 onwards. When you have such a homongous data, tech majors are interested to do some big data analysis and bring out something out of it, he said. “When I visit other States, I often find that tech experts of the Jharkhand government are far better compared to those States. We have various services like police online and other services are being developed. Jharkhand police is willing to collaborate with Microsoft. I was thinking about where the AI can be used in many areas,” he said.

Jha said there is a little amount of skepticism about using facial recognition and it can be used for tracking criminals and tracing missing persons, adding that AI can be of immense value in this domain. We also have huge amount of video data and sometimes identification of images can be done by AI, he said. For extra surveillance and suspicious activities, we all talk about how can we use resources optimally. So for, optimisation purposes, if we use factoring location technology and we can optimise resources we can use robotics and AI for extra surveillance purposes, Jha said.

Shashi Ranjan, CEO, Ranchi Smart City and IG Prisons, Government of Jharkhand said the government has a lot of data but if there is no technical know-how then people will not be able to get anything out of it. He said his department is flooded with a lot of data and the problem is how to analyse the data and incorporate the significant part of it in the policy formation. The urban word itself is the temporal and special thing with the time and space is changes so our policy and decision making capability should also change with this prospect. A smart city mission has been taken at a massive level across the globe. Many countries are having an intelligent system for providing basic amenities to the people. The vision of having world-class amenities should come through interaction and intervention of AI which augments the thinking capability, he said.

Sumit Kumar, VP, operations, Atal Bihari Vajpayee Innovation lab, Department of IT, Government of Jharkhand said technology has a pivotal role when we talk about startups. We have got around 107 startups that we have selected through our process. More than 30 per cent startups are either IT or ITES ones but there are other players also working on other sectors like agriculture, education and working on the ground and providing services, Kumar said. “When we talk about AI, there are many queries I get from the startups related to lack of access to data. The data is not easily available to many startups. There could be a way where we could provide data on an open platform in a machine-readable format where the concerned agency can use it for their research work,” he said.

Deepak Kumar, Senior Technical Director, NIC, Government of India said earlier check posts used to be manned by staff but now they are not. It used to be a herculean task to find out whether outside commercial vehicles have paid the temporary taxes to enter into Jharkhand. He said later, the government had decided to integrate NHAI check posts with the state-run posts to raise the revenue. A majority of 52 lakh registered vehicles in the State comprises of a large part of tax defaulters. The government is taking concerted efforts to track such tax evaders and make them clear their dues. AI can play a vital role in this, he said.