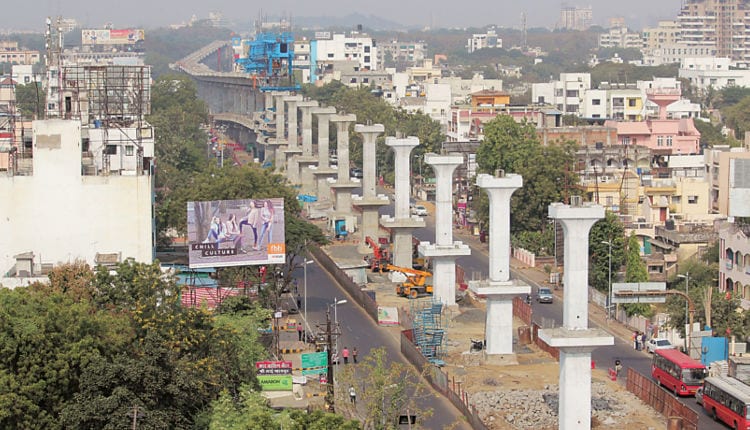 The work on Nagpur Metro is moving as per the timelines and 10 per cent of the cost has already been saved, as quoted in the Detailed Project Report, which amounts to about Rs 800 crores. This has been possible due to the use of advanced technology tools, informs Dr Brijesh Dixit, Managing Director, Maha Metro

“In the Nagpur Metro, we have one station, which is of 20 storeys, where the platform will be on the 5th floor. This will be a station of its own kind in India,” says Dr. Brijesh Dixit, Managing Director, Maharashtra Metro Rail Corporation (Maha Metro). This speaks volumes about the kind of infrastructure that will be built as a part of the metro project.
The Rs 8680 crore Nagpur Metro Rail project has 42 stations with a route length of 41.7 kms, while the Rs 11,420 crore Pune Metro Rail project comprising 30 stations has a route length of 31.25 kms. Given the scale, and first of its kind projects in the country, these will be built using advanced technology to avoid the conventional hurdles that massive infrastructure projects face in India: cost, time overruns, inefficient use of the land allotted, quality of infrastructure built, etc. Maha Metro has been able to deflect such issues because of the use of advanced technology across the project management touchpoints.

Maha Metro is a statewide metro corporation of Maharashtra, a SPV, which manages the construction work of all the metro projects undergoing in the state, except Mumbai, where the projects are already sanctioned. Maha Metro will continue to remain the anchor after the projects are operational. The metro lines are being constructed in Nagpur and Pune. The Detailed Project Report (DPR) for the Thane Metro will be prepared in conjunction with the Thane Municipal Corporation. Metro projects are also likely to come up in Nashik and Aurangabad.

The technology track of Maha Metro
Maha Metro has procured the 5D Building Information Modeling (BIM) technology, which automates the project management. It enables visualisation of the exact structure of a particular building entity, before it is built. In this case, it can be a metro station and the adjacent area, tracks, etc.

This includes sharing designs and drawings of the construction work, accounting work, site activity, bill approval, budgeting, quality management, and the entire documentation handling is being done on 5D BIM. “Many international metro projects are using this platform. It includes the Crossrail project in London, subway extension in New York City and Dubai Metro. It is interesting that more than 80 per cent of the 5D BIM technology development is done in India. The skilled IT manpower from Bengaluru, Pune and Gurugram are doing the technology development work,” says Dr Dixit.

The core technology platform used is customised, with technologies available from Bentley for BIM, Primavera for time scheduling, SAP for ERP and RIB iTWO for integrating these technologies. The base platform is an integration of multiple platforms. “The Nagpur project is well underway to completion, with more than 65 per cent of the work done. The length of 5 kms has been commissioned. Another 17 kms stretch has been commissioned by January 2019. Subsequently, the commercial operations will begin. The same platform is used for Pune, where approximately 20 per cent work is completed,” states Dr Dixit.

The automotive fare collection system will run on a common mobility card, with a contactless EMV card technology. It does not require any insertion. State Bank of India is the implementation partner and the hardware implementation will be done by the bank on their cost. They will have exclusive right to issue the travel cards. “Heavy usage of analytics will be done to incentivise the customers, based on tracking the travel patterns. This way, by having a modular fare structure, based on analytics, traffic can be increased and widened,” mentions Dr Dixit.

Benefits realised
Most of the infrastructure projects suffer from time and cost overruns, issues on quality and performance. Even after completion, they do not perform according to the expectations and does not provide the output visualised. The Nagpur Metro project work started in June 2015 and more than 65 per cent work is over, with 5 kms phase already commissioned. “The work is moving as per the timelines and we have already saved about Rs 800 crores. More savings will follow as the rest of the 30 per cent work is completed. This has been possible due to the use of advanced technology tools,” acknowledges Dr Dixit.

Basically, SAP has provided solutions to the Nagpur Metro in four areas. For Enterprise Resource Planning (ERP), which includes fundamental processes like HR, payroll, finance, projects, audit. Moreover, the solutions also cover the Governance Risk and Compliance (GRC); Business Planning and Consolidation (BPC) and the real estate management software for managing the metro stations. This software helps in monetising the real estate infrastructure to the best possible extent by providing the space as lease, on rent, etc. This is a significant offering from SAP. These solutions were used in phase I of the metro project.

“In phase II of the implementation, these solutions will be moved onto the in-memory computing software, SAP Hana. It has IoT and ML capabilities powered by Hadoop. The GIS based 5D BIM will be integrated with assets, inventory rolling and forecast. The solutions cover office functions, takes care of inventory and their live movement, user apps, etc.,” says Hemant Dabke, Vice President – Strategic Industries, SAP Indian Subcontinent.

SAP has integrated the feed from over 1000 cameras deployed across Nagpur and the IoT algorithm runs intelligence on top of it. The ML will begin generating triggers and alerts and provide insights in case of events: This can be helpful in case of any emergency response; providing guidance in case of any work getting stalled, etc.

While building the metro project in Pune, Maha Metro brought together 18 different agencies in order to coordinate the project work. The agencies include the respective authorities in areas of water, electricity, gas, telecom, phone, etc. As a result, the overall cost of laying the fibre was just 5 per cent, as compared to if it would have been done without the coordination or on a standalone basis. “The inventory and spares management done as a part of the collaboration effort was done on the SAP systems,” says Dabke. These systems are also tied to the backend and the financial systems. SAP has also supplied the projects module.

“As far as Nagpur is concerned, our non-fare box revenue will be in excess of 60 per cent. This is even more than what was visualised in the DPR. In Hong Kong, this number is 40 – 42 per cent (best in the world) and Delhi Metro Railway Corporation (DMRC) earns approximately 20 per cent in non-fare box revenue,” informs Dixit. Non-fare box revenue is the money earned after subtracting the receipts from ridership from the overall revenue earned.

Globally, in case of a public utilities, there are hardly any examples of cost being fully recovered. It remains to be a big challenge. The subsidies are provided by the government and the fare also has to be kept affordable for the passengers to use public transport more and give up private transport. This is the challenge the world over. In this light, the non-fare box revenue becomes critical to juggle costs and revenue.

“SAP has not been contracted for Thane, Nashik and Aurangabad metro projects. We expect that to happen in the next six months,” adds Dabke.