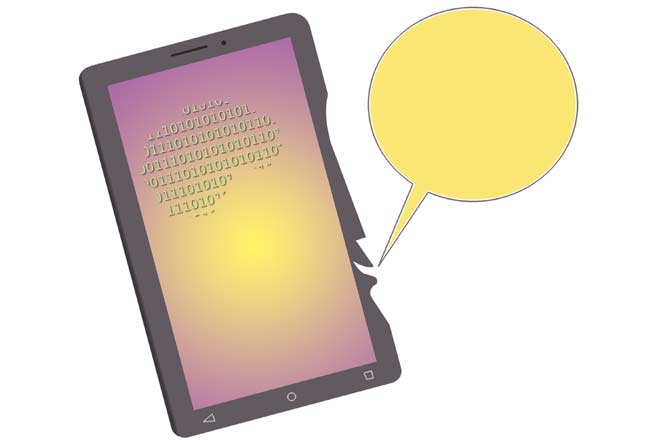 LET’S say you want to book a cab, but before that, you want to order a burger. Suddenly, you remember you have to make your postpaid mobile and DTH bill payments, and also go for an easy broadband internet recharge. Now, instead of having the need to download several e-commerce apps on your smartphone, all you need to do is use only one. Enter Niki, a homegrown artificial intelligence (AI)-powered ‘chatbot’ that acts as a virtual friend and helps you manage your e-commerce services via a simple chatting interface (saving precious memory space as well). It also has the ability to learn and become more ‘personal’ as you keep interacting with it.

Niki is free to use, and you only pay for the services you want. It also responds to your queries with lightning speed every time. And all of this, starting from facilitating, recommendations, ordering and payment for multiple services, happen automatically in a single chat window.

It may not be time yet to say goodbye to Siri (Apple’s ‘intelligent personal assistant’) or Google Now (Google’s Siri counterpart), but Indian start-ups are betting big on a decades-old idea that is enjoying a renaissance of sorts, thanks to better data and computing capacity, as well as all the attention showered by global tech giants. Millions of dollars are now being invested in AI start-ups, including Indian ones.

Last month, Bengaluru-based AI start-up Niki.ai (the creator of the Niki chatbot) raised a second round of funding from Ratan Tata, chairman emeritus of Tata Sons, and existing investor Ronnie Screwvala’s Unilazer Ventures. In October last year, Niki had raised an undisclosed amount of funding in its seed round from Unilazer.

In January this year, Snapshopr, an AI start-up that specialises in visual search and image recognition, secured an undisclosed amount in angel funding led by former Flipkart CTO Amod Malviya. In December last year, another AI start-up — Mumbai-based Arya.ai — raised a pre-Series A funding of $750,000 from YourNest Angel Fund and VentureNursery members. In fact, Arya.ai was the first Indian start-up to be selected by Paris&Co, a French innovation agency, as one of 21 companies globally that do standout innovations. A recent forecast by global research firm MarketsandMarkets says the global AI market is estimated to reach $5 billion by 2020. “The increasing use of machine learning technology in advertising, media and finance sectors, and growing demand for AI across diversified application areas are driving the growth of the AI market,” the findings showed.

INDIAN AI IN THE WORKS

Arya.ai: Mumbai-based start-up offers AI developer platform for both B2C and B2B businesses for use in verticals as diverse as creating an AI assistant for radiologists. Got $750,000 from YourNest Angel Fund, VentureNursery.

SigTuple: Bengaluru-based start-up yet to commercialise, but working on Shonit, AI-based automated screening solution for complete blood count test. Seed investment from Flipkart founders Sachin and Binny Bansal and Accel Partners, among others.

“The market opportunity is huge, though the applications are immense; hence putting it in numbers is difficult at this point. AI applications are already coming up in every industry right from healthcare and commerce to space exploration and productivity, among others,” says Nitin Babel, co-founder of Niki.ai. Founded in April last year by four former IIT-Kharagpur alumni — Shishir Modi, Sachin Jaiswal and Keshav Prawasi, besides Babel — Niki.ai leverages natural language processing and machine learning technologies to converse with customers over a simple chat interface, and places orders with partner businesses within seconds.

However, unlike other AI applications (such as Siri, Google Now, etc) that focus mainly on productivity, Niki.ai’s core is e-commerce. “Online commerce is a huge problem globally with a lack of uniform interface as well as intelligent functionality. We took our time and did extensive research to come up with the idea that conversational interface powered with capabilities of AI can solve this user problem,” explains Babel. Currently, Niki.ai works on a channel partnership revenue model. “We essentially get a commission for every order that we generate for our vendors, who do the fulfillment,” adds Babel. Niki.ai claims that its product supports end-to-end bookings for Ola and Uber cabs and has a first-of-its-kind in-chat payment option using the Paytm wallet.

But AI is not a new concept, having been a subject of interest for several decades now. So what has been the trigger for the current wave of enthusiasm? “AI is getting a lot of traction in recent times because of the ease of crunching huge amounts of structured and unstructured data through the use of AI-based products, enhancements in software and hardware and, last but the not the least, rapid growth and development of cloud-based infrastructure,” says Rohit Kumar Pandey, co-founder of Bengaluru-based medical tech start-up SigTuple, which received a round of seed investment from wide-ranging and prominent investors, including Flipkart founders Sachin and Binny Bansal and venture capital giant Accel Partners, among others, in October last year.

SigTuple — founded in April 2015 — is yet to commercialise its products, but started working on its first offering, Shonit, an AI-based automated screening solution for complete blood count test, in September last year. It just completed a comprehensive clinical validation study at a reputed diagnostic laboratory in Bengaluru. “We should be able to hit the market soon. In parallel, we are also developing solutions for andrology (semen analysis), urine analysis, chest X-ray analysis and retina scan image analysis. All of these are cloud-enabled, and agnostic of geography and image capture device,” adds Pandey.

However, compared with overseas markets, India is yet to make a substantial progress in the business of AI. “In foreign cities, the exposure to AI is little matured compared to in India. We have a few talks for launches in the overseas markets, but in India, we are only having meet-ups for now to make the awareness grow and teach more people about the latest technologies,” says Deekshith Marla, co-founder of Mumbai-based Arya.ai, an AI developer platform for B2B sectors such as banking and finance, manufacturing, e-retail and automobiles as of now.

The Arya.ai platform has already been launched in the conferences at Silicon Valley, Paris, London and Singapore. “In India, we are having meet-ups every alternate week either in Bengaluru, Mumbai, Gurgaon or Delhi to help developers understand about AI and how Arya.ai could ease their work building the intelligent applications,” he adds.

World’s first MBA course on smartphone launched; is it worth it in India