Cost cutting ideas for CIOs in the times of COVID-19

Majority of CIOs are either in the process of renegotiating vendor contracts or are planning to do so. CIOs from a cross section of Industries are also of the view that with work from home (WFH) becoming the new normal, it will also result in reduction of real estate costs for companies 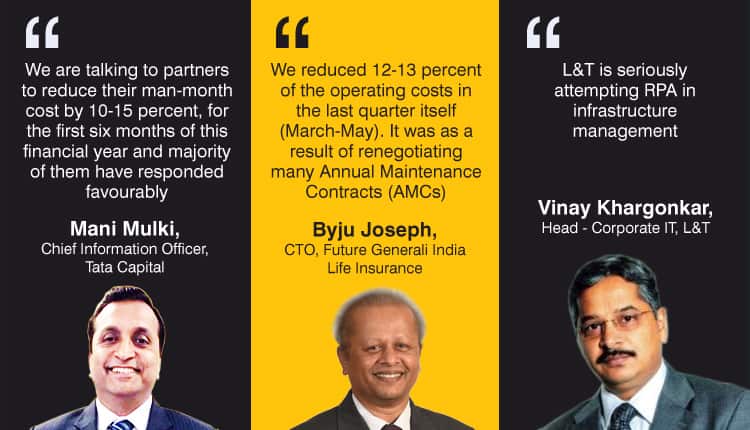 The times of COVID-19 are a redux of the 2008 financial crises or maybe worse, in its own ways. CIOs are forced to cut back on their investments and costs. While it’s not all about purely taking a cut, there are ways to invest in tools that lead to revenue generation.

The CIO of a top auto company, who spoke on condition of anonymity said, the company is in the advanced stages of launching a digital marketplace model to allow customers to shop from home. “Additional budget allocation will be done to facilitate the customers to do vehicle shopping from home. The necessary digital channel will be built. A marketplace model will be built for the customers to buy commercial vehicles, auto rickshaws, spare parts, scooters, etc. The dealers will be provided the necessary discount for the orders booked,” he says.

Renegotiate contracts with vendors
Many CIOs are reworking with their vendors on the annual contracts to revise cost structures. “Future Generali India Life Insurance works with multiple partners and many of them have provided us with additional compute, VDI resources, Microsoft teams installations, cloud model implementation without any additional cost. A long term value plan attached with the tangible and intangible benefits was put up before the management. It proved to be a clincher. We reduced 12-13 percent of the operating costs in the last quarter itself (March-May). It was also as a result of renegotiating many Annual Maintenance Contracts (AMCs),” states, Byju Joseph, CTO, Future Generali India Life Insurance.

While renegotiating IT contracts is one way to relook at rationalising costs, one of the other ways is to reduce the costs associated with the consultants and employees working for the outsourced vendors. “We are talking to partners to reduce their man-months and the majority of them have responded favourably for the first six months of this financial year. They will reduce their man-month cost by 10-15 percent,” says Mani Mulki, Chief Information Officer, Tata Capital

The same holds true for Vinay Khargonkar, Head – Corporate IT, L&T. “The company is in the process of negotiating with the technology vendors, to whom work has been outsourced. The consultants are WFH and are not going at the site, so the costs reduced cannot be passed onto the company,”

When asked about his top two ideas for CIOs to reduce costs, Jagdish Lomte, Vice President (IT) & CIO – BTG, Thermax Limited said, “Renegotiating contracts with the vendors and Work from home can significantly reduce costs for CIOs,”

Business outcome will decide which investments will go through
COVID-19 has forced organisations to change the way they operate. For most organisations, Work from Home will be the new normal. WFH will be a big cost saver. It will massively reduce the requirement of the commercial real estate space and will have bottomline benefits. COVID-19 has made a big dent in the first two quarters in this year. “Now on, initiatives having a significant business outcome potential will be given a go ahead. The rest will be put on hold,” says Mulki. Hitherto, programmes estimated to be a hit would have been sanctioned. No such gut-feel to be allowed now.

Certain initiatives will be put on hold. “But certain programmes, which are mandatory in nature – like e-invoicing, will be rolled out as per schedule. They are also budgeted for in this financial year,” says the CIO of an auto company quoted earlier.

Apart from budget cuts, extra investments will have to be made in areas like application, network security. “The savings from the application and IT infrastructure has been channelised to cyber security,” he says.

Automation is a major tool to cut costs and when WFH is becoming the order of the day, automation will gain further importance, when there will be less presence of human resource in offices. “L&T is seriously attempting RPA in infrastructure management,” says Khargonkar.

More areas to cut costs
When asked about a few ideas to rationalise costs in order to face the slowdown, the CIO of the auto company says, “There is instruction on freezing the new hiring round. Also it is likely that there will not be any major expansion plans going forward, thus new investments on IT infrastructure including desktops, laptops will be stopped,”

Only the must have investments should be taken forward – “like hardware or network procurement. Application development and upgrades, if not necessary can be postponed,” says Pratap Pat Joshi, CIO, Mercedes-Benz India.