Home  »  News  »  How Can Enterprises Survive In Internet Shutdowns?

How Can Enterprises Survive In Internet Shutdowns? The morning of December 11 witnessed the passing of the Citizenship Amendment Bill which sparked a countrywide protest against it. A huge number of indignant citizens took to streets expressing their blatant displeasure with the proposals made in the citizenship law leaving the police force in agony of controlling the mob. As the momentum of this protest grows stronger and wider, stricter actions of detention and internet shutdowns have been ordered by the government.

As per an international publication’s report, India is leading the world with maximum internet shutdowns since 2014. In 2018 alone, they have recorded more than 100 internet shutdowns, Kashmir accounting for the most part of it. An internet shutdown is usually ordered by governments when the situation is too tense and they want to restrict communication.

To operate without the internet is more than just an inconvenience for the citizens of this country, it disrupts daily life and crucial situations that require the internet to work. One of the most affected parties of this shutdown would be ‘Businesses’.

How would enterprises be affected?

The damage and inconvenience caused to enterprises are obvious, but there are a few solutions that could help them control the situation.

How enterprises can survive in Internet shutdowns?

Usually, in large enterprises, where offices are spread across multiple locations, cities and even countries, the IT teams can set up a “VPN” that connects your device via your company’s private network to the internet by creating a secret tunnel between the two. It allows you to send and receive data with the device you are connected to.

Since as an enterprise you are connecting to your office locally, via your ISP’s provided wire, you are technically not connecting to the internet in the affected area, and will then use the remote locations internet connection to finally connect. Hence you would technically end up bypassing the local internet ban.

There are quite a few messaging apps that work on Bluetooth and don’t need an internet connection to transmit messages. However, in some apps, the messaging works only if you are in close proximity to the person you want to connect with.

Apps like Firechat and Briar work on Bluetooth or Wifi hotspot to send across messages, images, and graphics. For a more secure network, Signal would be a good option as it is a secure messaging platform that lets you send SMS, make calls and video calls when you are offline and also has the option of disappearing messages.

This can come in handy if within the same office building you rely heavily on communicating across teams using messaging apps like Whatsapp, in the event of an internet shut-down and to continue working with your teams you need to explore such options so work doesn’t stop.

Recently HongKong had seen widespread protests and subsequent disruption of internet services, and Enterprises and people relied on such hacks to continue their way of life and work.

Internet shutdown would bring things to a standstill, but the hope in people and solutions provided by some on the microblogging platform Twitter is worth trying. 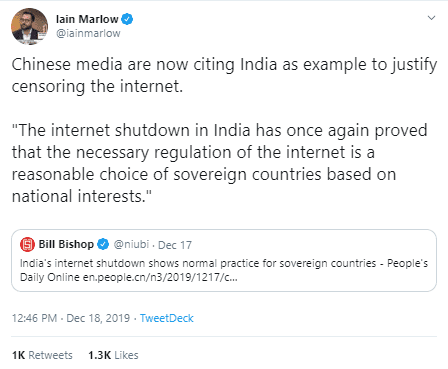 While some raised questions on the current internet laws and reworking them, others provided alternate sources of providing information and communicating. Surviving the shutdown can be extremely difficult but not impossible, enterprises just need to be alert and prepared for it.

How vulnerable are smart cars to cyberattacks?