Technology Sabha, one of India's premiere eGovernance event will be organised in Bhubaneswar and will have some of the top ministers and public servants addressing the audience 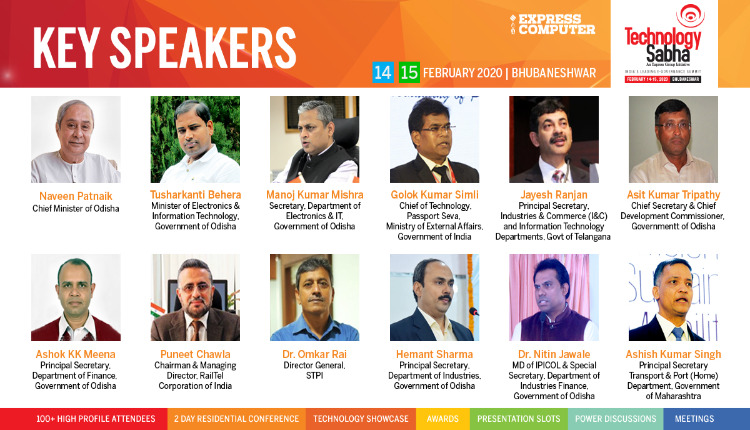 Odisha’s citizen service governance model is marked with golden spots such as: The technology enabled Mo Sarkar (My Government) initiative – CM Naveen Patnaik’s personal push to take regular feedback from citizens about government services to the Odisha Government’s meticulous handling of the ‘Fani’ typhoon, that led to minimal loss of life and property compared to the damage caused by the same intensity of disasters before or whether it is the story of drone enabled Jaga (Land) Mission — which is the world’s largest slum land title project. It involves the government surveying and awarding slum dwellers like Tatilu a legal land title. The Odisha government became the first in the country to bag an award from the World Habitat Mission for this particular project or attracting tourists to Odisha.

Odisha’s Foreign Direct Investment (FD) equity inflows surged 330 percent in the first half of FY20. FDI in Odisha shot up from $10 million to $43 million. The state is next only to Kerala & Lakshwadeep in the growth ranking in inbound FDIs.

The state also organised the Hockey world cup and has also bagged the rights to host the next Hockey World cup in 2023. The state has achieved one milestone after the other under the leadership of CM Naveen Patnaik. The state has also recently been ranked second in the NITI Aayog’s report on Sustainable Development Goals (SDGs).

Odisha is firing on all cylinders. The bashing of natural disasters hasnt stopped the state in taking developmental strides and a lot of it has to do with the technology based initiatives undertaken by the state from time to time. There are many stories to be shared and you can hear all of them at the Technology Sabha 2020.

Puneet Chawla, CMD, RailTel Corporation of India will be the keynote speaker on day 2. He will talk on the ‘Digitalisation of Indian Railways’

Hide n Gift allows you to do your valentine check