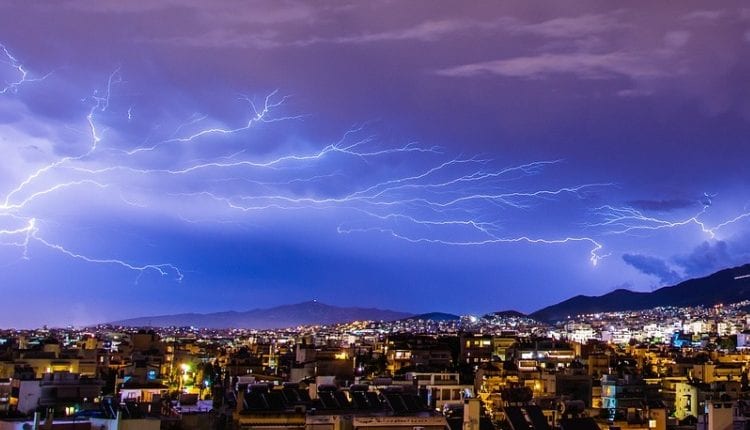 At the beginning of June, the German Weather Service counted 177,000 lightning bolts in the night sky within a few days. The natural spectacle had consequences: Several people were injured by gusts of wind, hail and rain. Together with Germany’s National Meteorological Service, the Deutscher Wetterdienst, computer science professor Jens Dittrich and his doctoral student Christian Schön from Saarland University are now working on a system that is supposed to predict local thunderstorms more precisely than before. It is based on satellite images and artificial intelligence. In order to investigate this approach in more detail, the researchers will receive 270,000 euros from the Federal Ministry of Transport.

One of the core tasks of weather services is to warn of dangerous weather conditions. These include thunderstorms in particular, as these are often accompanied by gusts of wind, hail and heavy rainfall. The Deutscher Wetterdienst (DWD) uses the “NowcastMIX” system for this purpose. Every five minutes it polls several remote sensing systems and observation networks to warn of thunderstorms, heavy rain and snowfall in the next two hours. “However, NowcastMIX can only detect the thunderstorm cells when heavy precipitation has already occurred. This is why satellite data are used to detect the formation of thunderstorm cells earlier and thus to warn of them earlier,” explains Professor Jens Dittrich, who teaches computer science at Saarland University and heads the “Big Data Analytics” group. Together with his doctoral student Christian Schön and the meteorologist Richard Müller from DWD, he has therefore developed a system that could soon supplement NowcastMIX in predicting thunderstorms. Their project is a first step to explore the applicability of artificial intelligence in the prediction of weather and climate phenomena.

In order to accurately predict thunderstorms in a specific region, the so-called convection of air masses, i.e. the rise of heated air while colder air sinks in the surrounding area, must be detected early and precisely. This has been known for a long time. The highlight of the new system, however, is that it only requires two-dimensional images, namely satellite images, to detect these three-dimensional air shifts.

In order to see what is happening in the sky three-dimensionally based on the two-dimensional images, the researchers use photographs taken fifteen minutes apart. Part of the image series for the respective area goes as input to an algorithm that calculates what the future image, not supplied to the algorithm, would look like. The scientists then compare this result with the real image. The size of the deviation between the forecast and reality – the researchers call it the “error” – then serves as input for a second algorithm, which the researchers have trained using machine learning to recognize the relationship between the size of the error and the occurrence of a thunderstorm. In this way, they can calculate whether it there is thunder and lightning or not. “This is the strength when we apply artificial intelligence to large amounts of data. It recognizes patterns that remain hidden from us,” explains Professor Dittrich. This is one of the reasons why he and other colleagues have just initiated the new bachelor’s and master’s degree program “Data Science and Artificial Intelligence”.

In the case of lightning and thunder, this combination is definitely “multifaceted,” says Dittrich. “Based on the satellite images alone, we can predict flashes with an accuracy of 96 percent for the next 15 minutes. If the prediction window is opened further, the accuracy decreases, but still remains above 83 percent for up to five hours.”

However, the rate of false alarms is still too high, according to the researchers. Nonetheless, they believe that they can significantly reduce these false alarms by training their model on additional features that are also used by the current NowcastMIX system, for example. The Federal Ministry of Transport has already granted the computer scientists from Saarbruecken 270,000 euros to investigate this in more detail.

How Otis is building ‘smart’ elevators of the future

How To Go Facebook Live On Your Desktop Or Phone?