How AI can help in making the world a safer place 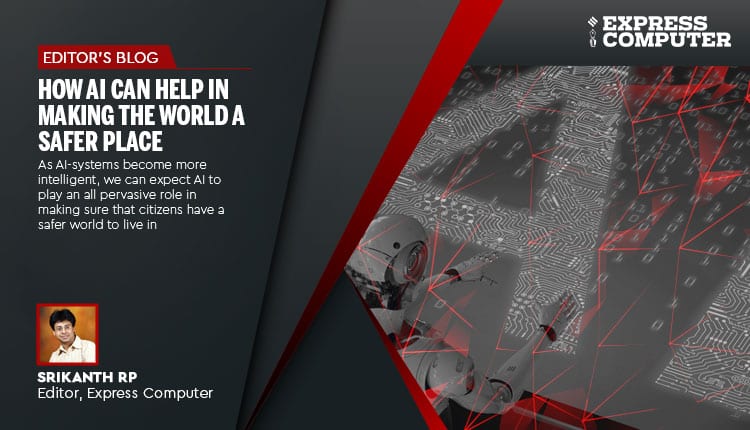 With more than 1,50,000 people killed every year and close to 400 people dying every day in traffic related accidents, India has a record that is higher than other developed markets such as the United States. Can a technology like AI help? With the use of AI, it is believed that accidents related to jumping of the red light or cases of reckless driving will disappear, as autonomous vehicles will strictly follow set rules (such as speed limits) and communicate with other vehicles. Today, cars with semiautonomous features already exist. For example, Cadillacs equipped with the Super Cruise technology have capabilities that make sure that the driver is watching the road at all times. If a driver still does not pay heed, the car is automatically slowed down to a stop, and a call is made to a vehicle assistance service. Experts believe that a significant percentage of car accidents involve human choice. Using AI will greatly reduce error rates and help avoid human errors such as texting while driving.

Another extremely relevant use case from an Indian standpoint is prevention of floods, which claim more than thousand lives every year. AI can be of great help in aiding government agencies alert and warn people living in flood prone areas. A case in point is the agreement that Google has signed with the Central Water Commission (CWC), India’s apex technical organisation in the field of Water Resources. The CWC will use Google’s AI expertise for effective management of water resources, particularly in the field of flood forecasting and dissemination of flood related information. Google will create flood inundation maps, and help disaster management organisations to identify well in advance the regions and the affected population which are at risk from floods.

As AI-systems become more intelligent, we can expect AI to play an all pervasive role in making sure that citizens have a safer world to live in

Crime prevention is also a field which can greatly benefit from using AI. In India, an AI-focused startup called Staqu is working closely with police forces of Rajasthan, Punjab and Uttarakhand to identify criminals in real time from CCTV footage. This solution has already helped the police apprehend more than 400 gangsters and bust close to eight terrorist modules. In Chennai, the T Nagar Police has partnered with a Chennai based firm to use its software called FaceTagr that can identify criminal suspects among a large crowd. The same software can also be used to identify missing children. The Railway Protection Force in Karnataka is using this software to track missing children. The implications will be huge, if this software is integrated with the portals that have databases of missing children. If a CCTV camera spots a missing child, an alert with the location coordinates can be sent to the relevant authorities.

These examples are just the beginning of an era which will become more AI-enabled. As AI-systems become more intelligent, we can expect AI to play an all pervasive role in making sure that citizens have a safer world to live in.