Home  »  Editorials  »  How policing in India is getting a tech makeover

How policing in India is getting a tech makeover 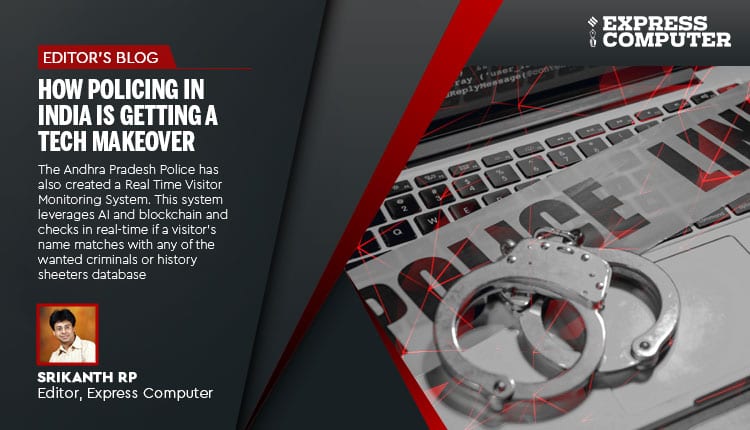 With a huge population, India’s police force is one of the most understaffed in the world. Against the United Nations recommended ration of 222, India has only 144 police offers for every one lakh citizens. Apart from the ground force, there is an acute shortage of investigation officers. To handle crime the smart way, a host of police stations in different states are taking the help of emerging technologies such as AI, blockchain and analytics. A case in point is the Uttar Pradesh Police, which is using an AI enabled app developed by startup Staqu. The app digitizes and searches records using AI and carries records of criminals, assisting police forces at ground zero with real-time information retrieval during investigations, regular checks, verifications, and at police checkpoints. Interestingly, the app also has a ‘Gang identification Technology’, which helps the police in not only identifying a criminal, but also their associates active in different districts and part of the states. The startup is also working with police departments such as Punjab, Rajasthan and Uttarakhand. The impact of using technology is huge – the startup has helped the police solve over 400 high risk and complicated cases.

The Andhra Pradesh Police has developed an app that helps in keeping track of old criminals and offenders. This is aimed at closing the gap that exists when a person lives in one area and commits a crime in another area. Typically, the head of the police station where the offender lives will not be able to know the activities of the offender, unless the head of the police station where the offence is committed informs the head where the offender lives. Today, the state has a better track record in tackling crime as all details of history sheeters are digitised and their activities are updated on a regular basis. The same data can be fed into facial recognition systems and their movement can be detected in critical locations such as airports.

The Andhra Pradesh Police has also created a Real Time Visitor Monitoring System. This system leverages AI and blockchain and checks in real-time if a visitor’s name matches with any of the wanted criminals or history sheeters database

Maharashtra also has created the Automated Multimodal Biometric Identification System (AMBIS) — a digital database of finger prints and photographs of criminals. With its automated matching capabilities, AMBIS will bring a major push towards smart policing in the state by eliminating limitations of manual search on the biometric database. This is one of the first systems in India to implement integrated face enrollment and detection. With the planned integration of this system with various CCTV systems (such as Mumbai CCTV) interesting use cases such as real time search in CCTV cameras for criminals can be achieved.

The Andhra Pradesh Police has also created a Real Time Visitor Monitoring System. This system leverages AI and blockchain and checks in real-time if a visitor’s name matches with any of the wanted criminals or history sheeters database. To prevent break-ins in houses when people go on holidays, the Andhra Pradesh police has created a ‘Locked House Monitoring System’. Using a motion detection camera, this system monitors a house (once requested by the owner) and any intrusion detected is automatically sent an alert to the police control room by the system. The system has helped in catching four offenders on a real-time basis.

What we are witnessing in India is just the tip of a huge digital transformation that is happening with respect to the police departments. As more police departments start showcasing their success using technology, expect the trickle now to become a flood!

Biometrics is changing the paradigm of secure identity authentication