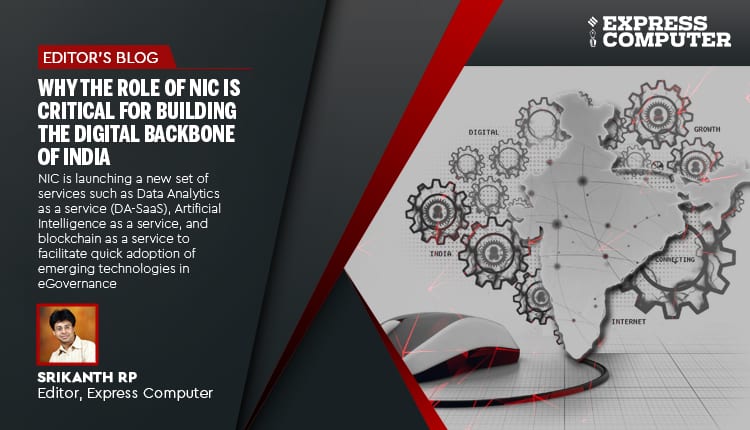 While many national landmark initiatives like Aadhaar, GSTN and GeM have rightly got the desired limelight and attention, few departments like NIC have gone about their role in building the
digital backbone of the country in a quiet and effective manner. Even as the IT ecosystem in the country has expanded many times, NIC has played a stellar role in ensuring that the crucial last mile delivery of the government services becomes a reality.

NIC is in a unique position and has played a crucial role in ensuring that a large number of government initiatives such as Swacch Bharat Mission, e-Way Bill, MyGov, e-Hospital, fertilisers distribution, etc have been completely managed using digital platforms from concept to commission.

NIC is launching a new set of services such as Data Analytics as a service (DA-SaaS), Artificial Intelligence as a service, and blockchain as a service to facilitate quick adoption of emerging technologies in eGovernance

NIC continues to embrace futuristic technologies, and was instrumental in setting up the first national cloud ‘Meghraj’ for the Government of India in the year 2014. Meghraj has helped in accelerating the delivery of e-services to citizens. NIC is also launching a new set of services such as Data Analytics as a service (DA-SaaS), Artificial Intelligence as a service, and blockchain as a service to facilitate quick adoption of emerging technologies in e-Governance.

NIC’s understated role in quietly and efficiently building the nation’s infrastructure must be appreciated as it is due to NIC that India is now able to quickly launch e-services that benefit the common citizen immensely.

The what-if power of analytics

The democratisation of AI