The journey of IndusInd Bank on the software defined road 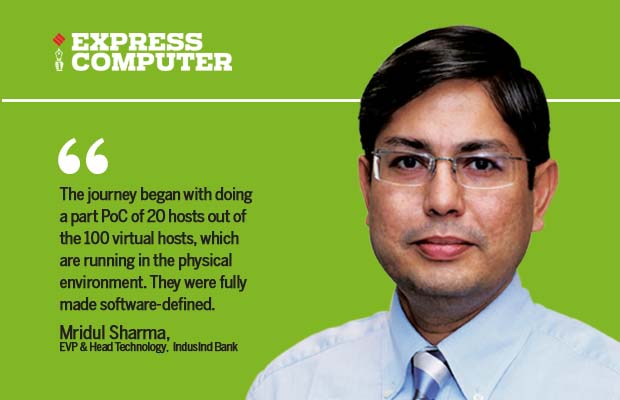 IndusInd Bank has made its infrastructure software-defined, enabling it to launch any service which can be delivered with unlimited demand spikes and still provide smooth customer experience

As a bank operating in a highly competitive sector, IndusInd Bank leverages technology to the optimum, and makes efforts to ensure that its IT infrastructure is highly flexible to meet dynamic market demands. In line with this objective, the bank has made its infrastructure software defined, enabling it to launch any service, which can be delivered with unlimited demand spikes and still provide smooth customer experience. The services are backed with unlimited capacities whereas hitherto, the infrastructure was limited with a certain headroom provided, but it was restricted. “In the software defined model, the capacities are unlimited, in the sense that, there are caps in terms of upper limit on what are the actual computing sources that are available on-premise, but it can be burst onto the cloud,” explains Mridul Sharma – EVP & Head Technology – IndusInd Bank.

The software-defined data centre has enabled IndusInd Bank to launch an aggregator app, which consolidates the frequently used apps by the retail customers. It provides the ease to operate from a single app for different use cases like food, travel, e-commerce, etc. The payment option has been integrated in the app itself. The thought process behind launching this app is to become useful to the customer in his daily requirements and how banking can be included in everyday activities.
Within the same banking aggregator app, multiple services can be accessed including a number of bill payment options. “Our key differentiator is that we provide offers available for specific services on the IndusInd aggregator app, which might not be available on the parent platform,” says Sharma. For example, the offers on Ola cabs available on the IndusInd aggregator app might not be available on the Ola app. The customer can compare the available offers on different platforms and pick the best one from a single app itself rather than separately visiting each app. This provides stickiness for the app in the customer’s mind. “We have recorded three lakh transactions in April 2018, and the m-o-m growth has been 15-20 per cent. The total number of active customers on the app is close to 90,000. The total Gross Merchandise Value (GMV) transacted on the app in April has surpassed 5.5 crore. Forty per cent of the customers are repeat transactors,” informs Sharma. API makes such apps possible. It makes the web of integrations a reality without any complex technology architecture. API is also scalable and provides superior customer experience.

The RoI is measured by the total engagement numbers. The more customers and repeat customers on the platform, the more the app is moving towards justifying the investments made on it. The number of the mobile banking users has also grown exponentially. In the last three years, the number has jumped from 1 lakh to 10 lakh. This speaks for itself on the RoI front.

The journey
The journey towards a software-defined data centre was taken about an year-and-a-half ago. It also slashes the time-to-market, by faster infrastructure provisioning times. It completely changes how the bank allocates resources; for example, if a certain concept has to be tested out and requires resources, the relevant team cannot be asked to wait for a month or two. By that time, the idea is gone. The software enabled infrastructure can allow provisioning in a few hours. “The journey began with doing a part PoC of 20 hosts out of the 100 virtual hosts, which are running in the physical environment. They were fully made softwar-defined. This included all the three major components, compute, software and storage,” says Sharma. Subsequently, the on-premise experience also becomes cloud like. Provisioning infrastructure can be done in a few clicks. A software-defined approach also makes the on-premise, cloud integration simpler.

As a result, a year after going in for a software-defined data centre, the benefits are exponential. “Some transactions almost grew 100 per cent. The general growth rate was around 30 per cent. This happened with zero investment in infrastructure. The same IT infrastructure gave us an additional 30 per cent more output. In the previous model, we would have planned more CAPEX, may be for the next three years. It was a highly inefficient model,” informs Sharma. This model does not require the bank to plan for the next few years, but a headroom is set, which if breached, allows for only the expansion required, in terms of nodes. This is an efficient model, which makes the best use of the available resources.