The Hague and Karnataka renew MoU at Bengaluru Tech Summit 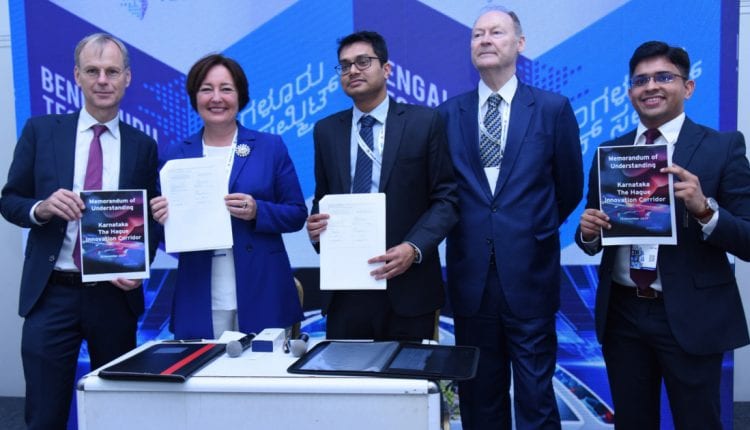 In presence of the Deputy Mayor of The Hague, the Netherlands, Saskia Bruines, The Hague Innovation Corridor MoU was signed with the Department of IT, BT and S&T, Government of Karnataka for collaboration in fields of health, cybersecurity, agri-tech and peace and justice. The MoU, which is a renewal of an earlier MoU signed in 2016, will focus on identifying partnerships for technology innovation facilitation, startup exchanges and nurturing talent on both sides.

Saskia Bruines, Deputy Mayor of The Hague, said, “The Hague believes in close international cooperation between government, science and industry. In our region, we are fortunate to have such close cooperation: top universities, tech hubs, economic top sectors, including Indian companies like HCL and Tech Mahindra, and a government that promotes regional cooperation. And now we are proud to underpin this by signing the MoU with the State of Karnataka.”

Prashant Kumar Mishra, Director, Department of IT & BT, said, “We are indeed delighted to see our relationship with The Hague, which started in IT BIZ during 2016, deepen further at Bengaluru Tech Summit 2019. Parties of today’s cooperation shall further grow our mutually beneficial relationship in the fields of health, cybersecurity, agri-tech and peace and justice we as we move forward.”

Also, at the Bengaluru Tech Summit 2019, JK Technosoft formally announced the opening of its European headquarters in The Hague. JK Technosoft (JKT), is part of JK Group.

eMudhra is a leading digital transformation company headquartered in Bangalore focused on offering identity and trust services to 35mn people and providing solutions for paperless transformation and digital authentication to Fortune 100 customers and a number of top enterprises in eGovernance, Banking, Financial Services and Insurance.

eMudhra has recently set up a company in The Hague in Netherlands to offer trust services, cyber security and artificial intelligence solutions to customers in the European Union. eMudhra was attracted to The Hague because of its reputation in promoting companies focused on cyber security. eMudhra thanks The Hague business agency for the continued support it received in helping set up its first presence in the European Union. Local Dutch government officials welcomed JKT and eMuhdra to The Hague.

Synergy between India and The Hague
One of the key deciding factors for the companies to choose The Hague is it’s central strategic location, proximity to potential customers, multilingual workforce alongside its knowledge base and ease of doing business. The Netherlands is one of the world’s most technologically progressive countries. In addition, the fact that there are already several leading Indian IT & Technology companies based in The Hague, was a strong argument in favour of choosing this city.

“After deciding on The Netherlands as a destination, the decision to be in The Hague was obvious, since it has a precedence of incubating tech companies in an ecosystem where it thrives,” said Basudev Pal, Director of JKT Europe.

The Hague: international city of peace and justice
The Hague is, with over 500.00 inhabitants, the 3rd largest city in The Netherlands. It is also the seat of the Dutch government, and the home town of the Dutch Royal family. The Hague is widely recognized as the city of peace and justice. The Hague regularly features in the world news because international legal cases are tried in the many courts and tribunals, such as the International Court of Justice and the International Criminal Court. But The Hague is more than courts, tribunals and palaces. The special status of the city draws many government leaders, knowledge institutions, non-profit organisations, businesses and students. Here, they work together, share their knowledge and develop new ideas on creating a better, safer or more just world. They do so, using the latest technology, for example in the fields of cybersecurity for which The Hague is a true ‘hub’.

But The Hague is not just a place for work. The Hague combines the benefits of a cosmopolitan city with the charm of a small town. A distinctive quality of life that ranks in the very top of international surveys. No matter where you are in the city, you are never far away from the 11-kilometre stretch of beach. The ideal place to take a break from life’s hustle and bustle and to find inspiration for new ideas.

Strategic partners in the Netherlands – THBA and NFIA
The Hague Business Agency (THBA), a Foreign Investment Agency of The Municipality of The Hague, is responsible for attracting foreign investments to the city. THBA has assisted JK Technosoft and eMuhdra, by providing an exclusive tailor made business program, which included a fact finding trip and meetings with local government officials and stakeholders in the IT & Tech ecosystem.

THBA works in close collaboration with The Netherlands Foreign Investment Agency (NFIA) office in Delhi. As an operational unit of the Ministry of Economic Affairs and Climate Policy, NFIA helps and advises foreign companies in all phases of establishing, rolling out and/or expanding their international activities in the Netherlands.