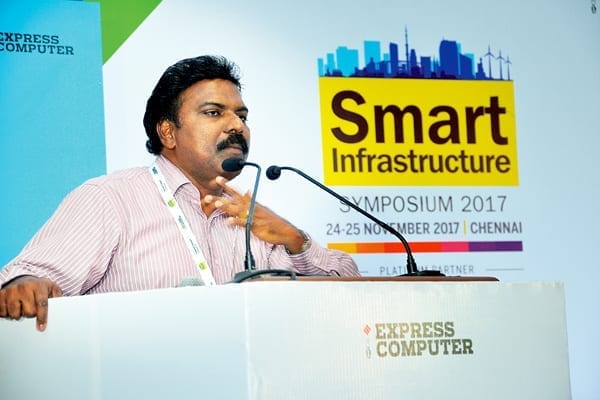 World class governance is what bureaucrats seek for. After the launch of the Smart Cities Mission (SCM), Information Technology is perceived to be the panacea for all issues. Major IT vendors are pushing to sell their IT solutions, however at the other end of the spectrum, there are government employees who are at times, frustrated, clueless, unhappy and most of the times drudging, and trying to give their best.

“I am intrigued with how do we make Governance world class. I don’t think IT is the panacea for all ills. My suggestion is the following: IIT- Integrity, Innovation and Technology,” says Dr. Santhosh Babu, IAS, Chairman & MD, Tamil Nadu Handicrafts Development Corporation, Ex-IT Secretary, and MD of ELCOT, Government of Tamil Nadu. It’s difficult to get all the three qualities together. The presence of this combination will lead to transformational leadership.

What is transformational leadership ?
Leadership is a characteristic prevalent in any entity of the society. Be it private sector, a family, an NGO or in the government,   but what matters is, “Are you ‘a leader of your imagination’ or ‘a leader of your circumstance’ ? is the question that leaders will have to ask,” states Babu. To apply this statement to a country, it can always be said, India has remained underdeveloped since Independence and will continue to be like that. As against an approach of ‘leader of your imagination’ will convert this statement to, ‘can India be made into a nation like Singapore in the next few years’.

Vision is the most important trait for smart city practitioners. Otherwise, all the running around will be a waste. Singapore had the vision to transform and it metamorphosed into a nation, which was unimaginable, if one were to see how Singapore was in the 1960s. Even Malaysia didnt wanted Singapore when the British wanted to decolonise Asia and wanted Malaysia to include Singapore.

Learnings from Singapore
All the residential buildings in Singapore has a built in system that collects and manages the rainwater in such a way that it doesnt drain the city’s main drainage system. The rainwater in excess is not considered as floodwater but drinking water after the ncessary processing. This is inspite of Singapore having 2400 mm of rain. In all, it rains for almost 187 days / Year. Whereas Chennai has a mere 500-600 mm / year.

Hitherto in Singapore, Hawkers were all over the country. Now, after designating places for ‘Hawkers markets’, the hawker markets are so organised and clean that the PM himself has breakfast at the hawker market.

Poompuhar: Case study of IT led governance
Babu completed his studies from Harvard University and was deputed as CMD of The Tamil Nadu Handicrafts Development Corporation, popularly known as Poompuhar. The way he approached the transformation at Poompuhar encapsulates the process of visioning and implementation. The challenge in governance is the absence of implementation after a roadmap, consisting of hundreds of pages of documentation is drafted by analyst agencies. “After me joining Poompuhar, the profit jumped from 27 lakhs to 1.5 cr in two years. However the potential is a whooping 5000 cr!,” says Babu. It’s a completely online organisation driven entirely on ERP. “We used to take 30 days for a procurement decision. Now, it is done in less than 3 hours! This is the difference in making the offices ERP driven. Nobody misses Babu in the office and he doesnt miss anybody. Eight offices are covered under the ERP system. The attendance is made online. The 16 showrooms across India are monitored via cameras placed due to which Poompuhar has saved about 60 lakhs / year, because of zero pilferage, which was an issue earlier,”

iPads have been provided to 40 employees, which helps them do reviews of showrooms, to check whether certain changes have been done or not, as per the orders issued, post the visit of the CMD or the concerned person.

The paper based processes were replaced by the accounting software, Tally. “Poompuhar is in the process of building an electronic repository of artisans,” informs Babu. Currently, there is no organised database of artisans and the middlemen connect the organisation with the artisans. There are about 900 – 2000 suppliers. None of them are artisans. In order to have a direct channel with the artisans, an e-commerce platform is being created. It will have one web page per artisan. Approximately 2 lakh web pages will be created.

Poompuhar will also create a Virtual Reality (VR) showroom. The entire product suite of Poompuhar can be viewed by wearing a VR headset. Moreover, the artifacts can be picked up and bought also using the headset.

The company is also active on social media sites; apps are made available; 3D designing and printing is used for souvenirs, for e.g. In Mahabalipuram, souvenirs of the temples are made using 3D printing. Sales related analytics tools are also used. The various cultural compositions inside the Chennai airport are designed by the edesigning solution at Poompuhar. “We have earned 35-40 cr from similar projects,”

A basic learning from the experience at Poompuhar is, the work done with the private sector for smart city will not be good without streamlining the internal system and making it work in order. The smart city projects will not come to fruition without great visioning in the government processes.

The article is based on the presentation made at the Smart Infrastructure Symposium, Chennai