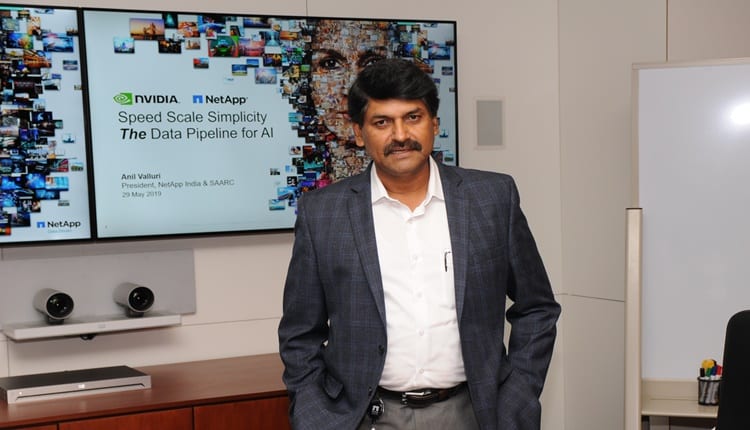 Recently, on NetApp’s Data Visionary Centre’s (DVC) one-year anniversary, the data storage and management company emphasized on strengthening its partnership with NVIDIA. The AI Center of Excellence has been announced jointly with NVIDIA to create an environment where they can showcase technologies to help customers and partners navigate the world of AI thereby helping them drive businesses of today and enterprises of tomorrow.

“Today every element (devices) we touch and interact with gives rise to digital information. Among others, e-commerce, financial institutions are churning a huge amount of data. For instance, the bank is not a bank anymore, it is an IT company. Data is the fuel today and it is growing at about 70-80 percent y-o-y. Probably in the last two years we have created more data than it has been in the entire human existence,” said Anil Valluri, President NetApp India and SAARC.

However, AI has not been in the top of the mind for many organizations in India yet, they have been restricting themselves and settling with traditional technology. But now they are up to strengthening the infrastructure and go with AI.

“India is ranked 19th across the globe in terms of AI adoption. Given our GDP which is at top six in the world, and population which is among top two, AI adoption in still inept. However, there is a huge initiative from the government and enterprise which is propelling the momentum. Undoubtedly, AI’s growth will result in the benefit of citizens too. Soon, billions of dollars will be added to the GDP as AI initiatives pick up,” added Valluri.

Collaborating for a common goal, NetApp and NVIDIA having large engineering set-ups in India are building up infrastructure to solve several issues of many establishments.

A year ago, NVIDIA and NetApp announced their collaboration to work together on an “AI-proven architecture.” Powered by NVIDIA’s DGX supercomputers and NetApp’s cloud-connected flash storage, both resolved to streamline organizational collaboration by bridging data and the cloud. Over the course of a year, NetApp integrated its systems with NVIDIA’s DGX series of supercomputer to create a uniform service package for NetApp customers.

The CoE will notably involve an investment by NetApp in the NVIDIA DGX workstation to provide customers and partners a better understanding of the role of AI and to deploy it to their advantage in a competitive environment. It will also enable them to experience first-hand the solutions and work with the skilled engineers from both NetApp and NVIDIA.

The core of what we bring to the table from an AI architecture perspective is Data Fabric which helps in data pipe lining architecture, said, Vishal Dhupar – Managing Director, Asia South – NVIDIA.

“Data is the new business capital. Today, CIOs are looking at the bigger picture, built upon getting better insights into their data and betting big on newer technologies, such as AI to reach maximum data capabilities and evolve into enterprises of the future. Our partnership with NVIDIA and the investment in the AI Centre of Excellence will allow customers and partners to accelerate AI data pipelines across the edge, core, and cloud, enabling them a faster way to deploy AI with pre-validated architecture,” said Valluri.

As AI is all about data, the collaboration makes it easier for companies to deploy AI in an environment where the notion is taken into consideration that ‘Data is not a monolith’. It is created in different places, is often moved and stored in multiple locations (edge, core, and cloud) while being utilized in another location. Data comes in many forms, structured and unstructured, quantitative or not as videos, images, blocks, and files. By bringing IT and data science teams together, data and AI can interact seamlessly to fuel business innovation. The motive is to help organizations achieve “edge to core to cloud” control over their data by delivering unprecedented access and performance.

Moumita Deb Choudhury
Subscribe to our newsletter
Sign up here to get the latest news, updates delivered directly to your inbox.
You can unsubscribe at any time

How Federal Bank uses RPA, analytics and blockchain for processes