Home  »  features  »  Tech Failures: What Can Brands Learn from Chaos at Chaayos

Tech Failures: What Can Brands Learn from Chaos at Chaayos

As the beverage chain battles through the facial recognition controversy, it is time for other brands to learn from tech failure and function conscientiously. A year-old beverage franchise, ‘Chaayos’ has found itself caught in a controversy after it rolled out its facial recognition system at select stores. It was supposed to be a trial run before they would actually set up the system officially. However, keeping this information from the customers left them fuming about their privacy being compromised. They took to social media to express the same.

The entire purpose of setting up this system was to get away with the hassle of OTP verification. Chaayos co-founder, Raghav Verma, explained that the facial recognition system was reducing their service time from 20 minutes to 2 minutes. Their ‘loyaltea’ program would be a lot quicker with customers logging in easily, placing repeat orders and so on.

While Chaayos has assured that they had no intention of using biometric information for any other purposes, they faltered at maintaining transparency with their customers. This was chaayos’ response to twitter flak: 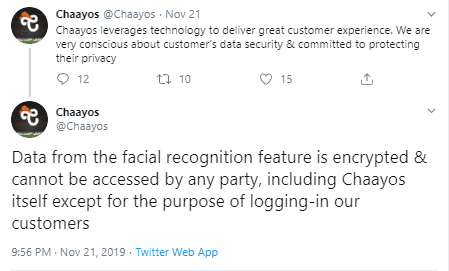 Facial Recognition failures across the world

Chaayos is not the only company to have gone through this disastrous turn of events. There was a major facial recognition failure where Amazon’s software wasn’t able to detect dark skin types and was considered racial. In fact, it was also passing racial comments.

To improve upon this, Google attempted to derive data from dark skin types by targeting them. There have been cases where facial recognition failed to classify transgender and non-binary people correctly. This seriously puts into question the ethics of data harvesting

A while back, the London Police tried to use a facial recognition system but failed miserably as it was wrong 80% of the time. With regard to India, there have already been talks on setting up facial recognition at airports and using it to find missing children.

While the intention behind setting up this system is noble, technology firms need to be really careful. They are dealing with sensitive data that must be secured well.

Also Read: Artificial Intelligence: The need for EQ along with IQ

What can Brands learn from Chaos at Chaayos:

The business world is under constant competition with their fellow brands and at times they might forget about the human angle in their field of work. Chaayos’ attempt at increasing speed processing of data was completely based on improving customer experience. What they didn’t realize is that the software takes in very personal data and if the customers aren’t made aware of it they will put forward their privacy concerns. The promotion at Chaayos read “ Why put numbers through when we can recognize you” which sparked the controversy. Attaining personal data of people without their consent is unlawful.

Ensuring the Accuracy of the system

For enterprises that are using the facial recognition system and providing a disclaimer, ensure that your system is accurate. If your system fails to perform when there is a slight change in appearance, it can be very embarrassing for the individual. There is also a possibility of the system recognizing the person as someone else which discredits its use in your enterprise.

Since you will be acquiring a huge amount of data, you must have enough storage for it. This kind of data is very sensitive and should be handled with tightened security. If your organization is not able to get a high level of storage then you should not consider setting up a facial recognition system. Be sure to save this data properly and use it only for the required purposes.

What does Indian Law Say?

Ever since the Right to Privacy was made a fundamental law, various cases of a data breach such as the Aadhaar controversy could be questioned. When it comes to data, there has been a constant effort in pushing a Data Protection Bill for a year now.

With the pegasus privacy breach on the journalists’ front and facial recognition failures on the organizational front, the rallying for this bill gets stronger.

5 Monotonous Tasks AI Will Help Your Organisation With