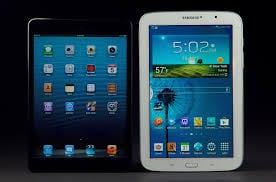 Indian tablet market continued to struggle to attract new buyers. According to the International Data Corporation (IDC), the India tablet market shipments for Q1 2014 stood at 0.78 million units, representing a year-on-year drop of -32.8% over Q1 2013. The drop was primarily due to lack of new buyers in the market.

According to the research firm, Samsung clearly led the tablet market in India. The strong performance of the brand in Q1 was supported by the good presence it held in the 7-8 inch screen size category. Presence in this particular screen size works as a double-edged sword, while the price conscious consumers would not mind paying the premium for an international brand like Samsung; consumers with deep pockets considering tablet as a third device would not mind shelling out more for a branded product in their maiden purchase.

While iPad mini continued to perform well in the market. Initial response for iPad Air also helped Apple post a strong quarter, Micromax took the third spot and accounted for 8.8% of the market share. However, in terms of volume growth, Q1 2014 proved to be a bit slower period for Micromax. Almost two-thirds of their volume was fueled by a new model, which the company had rolled out earlier in Q1.

“Bureau of Indian Standards (BIS) compliance is certainly hurting the white-box market. International device vendors like Apple and Samsung grew in comparison against Q4 2013, posting significant double-digit growth rates in Q1. However at an overall level, the branded vendors were unable to capitalize on the space left vacant by the erosion from white-box and smaller vendors,” Karan Thakkar, Senior Market Analyst of Tablets, Enterprise Client Devices and PC Monitors at IDC India, said.

Intelligence at the Door