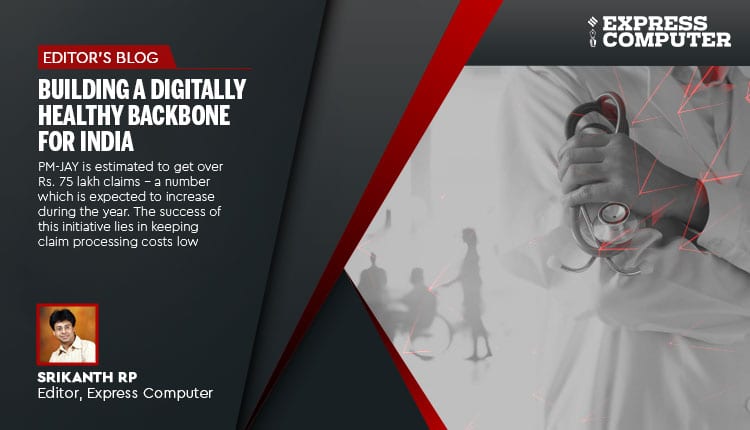 Despite some hiccups, Aadhaar has undoubtedly become one of the biggest success stories representing the rise of an efficient India that uses digital technologies to improve the quality of life for the common citizen of India. Last year, PM Modi, announced the launch of another big initiative, called Ayushman Bharat, Pradhan Mantri Jan Aarogya Yojana (AB-PMJAY), whose impact could be equally big in scale and impact. Targeting more than 50 crore beneficiaries, Ayushman Bharat could help India achieve the ultimate goal of universal healthcare.

Touted as the world’s largest government funded healthcare program, the goal is to deliver healthcare using the key principles of paperless, cashless and transparent treatment. IT has played a key role in enforcing these principles. Ayushman Bharat’s CEO, Indu Bhushan, says that IT plays a critical role in every aspect — be it beneficiary identification, empanelment of hospitals, transactions at hospitals or feedback.

PM-JAY is estimated to get over Rs. 75 lakh claims – a number which is expected to increase during the year. The success of this initiative lies in keeping claim processing costs low. Compared to an industry which largely uses paper-based processes, and both the cost and time to process a claim is pretty high, this is a complete paperless claims system. Hospitals can process their claims within 15 days. The National Health Authority (NHA) is looking at accelerating this process further, by investigating if certain portions of a claim can be auto approved. On the beneficiary identification front, NHA has also recently introduced an auto approval technology that would provide instant approvals. This is a critical area, and has been designed keeping in mind, the scale at which the number of claims can go up in the future.

PM-JAY is estimated to get over Rs. 75 lakh claims – a number which is expected to increase during the year. The success of this initiative lies in keeping claim processing costs low

As the platform uses Aadhaar for beneficiary identification, it minimises the probability of fraud. An open API policy has helped in integrating the platform seamlessly with existing claims processing systems that states have today.

Data analytics and machine learning are some of the technologies being closely looked at by NHA, for its applicability in cases related to fraud detection in claims. Over a period of time, as the overall adoption increases, the NHA can look at how technology can help in measuring hospital quality, accurate costing of procedures and in building deeper engagements with beneficiaries. The entire system is cloud-based, which helps in improved agility as the business IT landscape evolves and transactional data volumes start shooting up.

In a country where there are major inequalities with respect to access to healthcare, the success of Ayushman Bharat could prove to be the game changer for Indian healthcare.

How Mumbai Airport has enabled itself with technology

The what-if power of analytics

The democratisation of AI