To recognise Gujarat government’s efforts in embracing information technology to simplify citizen services and discuss how ICT can play a pivotal role to help citizens get better services, Express Computer in association with Microsoft India, organised Cloud for Digital Governance: The Tour, at Gandhinagar, on December 17. In addition to this, a skill development workshop was also imparted to over 150 IT cadre staff of various departments of the state government and NIC during the event.

The one-day conference is part of the Cloud for Digital Governance national program, unveiled by Microsoft in August this year to equip government staff in charge of IT across the country with critical Artificial Intelligence (AI) and intelligent cloud computing skills. According to Microsoft, the initiative aims to conduct series of physical and virtual workshops and train 5,000 personnel over a period of 12 months to help them leverage AI and secure cloud technology for efficient, transparent and productive governance.

Saurabhbhai Patel, Energy Minister, Government of Gujarat, was the chief guest at the conference, who said that in the last five years a lot of thrust has been given to Prime Minister Narendra Modi’s Digital India initiative for which the PM has made extensive efforts to take India to new heights. He said that the PM knows where the world is going and wanted to India to take the lead.

Patel remarked that Gujarat has always been at the forefront as far as industrialisation is concerned. “Today, if we want to become a five trillion USD economy, this is one sector where we will have to push very hard and a lot of investments and human resources and skill empowerment would be needed,” he stated.

According to Patel, there was competition among the states to achieve what others have not done. He said India’s strength lies in its young population. “India is much better compared to other nations and it gives an edge to the country. All of the countries with young population have taken the lead in the field of IT. Similarly, India has to take a lead,” he said. The energy minister underscored the importance of skill development training of the youth, particularly those who are associated with the Gujarat Government. 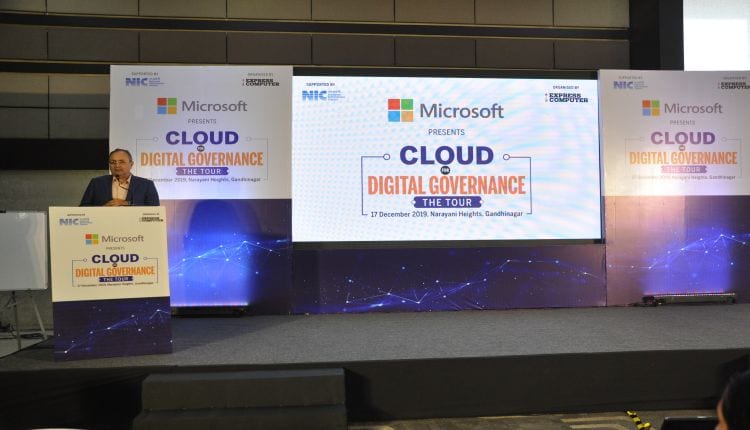 He further said that every Panchayat in Gujarat has got some young boys and girls who help the villagers apply for government-run welfare schemes and take benefits of those schemes. The young generation has been enlightened not only in urban but in rural parts as well. He highlighted IT initiatives of the Gujarat Government and said Gujarat’s energy department was first in the country to have an ERP system in place. Every system like purchase and accounts of the Energy Department was online. Patel said people talk of switching to renewable energy and advocate that thermal energy should not be preferred. “The plants can not be shut down overnight. The plants have to be managed in such a way that the supply and demand, every minute is equal,” he pointed out.

Manish Prakash, Executive Director, Public Sector, Microsoft India said that the conference is the first step that Microsoft is taking to improve the partnership between the Government of India and Microsoft, in building AI and cloud-led economy in different states.

He mentioned that Microsoft has a deep relationship with the Gujarat Government and it exists not just in terms of its products and services but because of its association with various NGOs for skilling manpower of various departments of the government, to improve education and healthcare services in the state.

Prakash said, “Today, we are talking about skilling of government officials and employees to build future ready skill set that is so essential in our lives. We talk about the fourth industrial revolution. The first one started with the invention of steam power. The second one happened with electricity and the third with electronics, and all of this took 60-70 years. Today we are getting into the fourth industrial revolution, which is massively different from what we have seen in our previous lives. The fourth industrial revolution is coming together by the connectedness of physical and biological world together. Men and machines are going to be connected with ‘Phygital’ layer which is physical and digital layer. At the heart of this, it created enormous opportunities and one such leverage that we have today is artificial intelligence. whether its IoT, nano tech quantum computing or genetic engineering,” Prakash said.

He said India has immense potential to achieve the dream of becoming a five trillion USD economy where AI could be leveraged not just to build driver-less cars and drone technology, but AI has the power to solve problems of sustainability and development. “It can solve issues related to economic inclusion, poverty, food production, better healthcare and governance as well. The expectations of the citizens in terms of governance are massive which can be addressed by AI,” he added.

Adding to this, Amit Prakash Yadav, Regional Commissioner of Municipalities, Government of Gujarat, said people that have a fear that AI would lead to loss of employment but it is not the case. “It has been discussed at this forum that the AI would create around 700 million jobs. There is an urgent need of sensitising people that a modern technology like AI is not going to snatch someone’s job rather it would serve as an enabler to employment creation,” he remarked.

Yadav said that AI can be used in various domains like the healthcare sector. He cited an example of tuberculosis (TB) and said it is one of the diseases because of which thousands of people die every year. He suggested that the government can use AI to treat TB patients. Similarly, this technology can be used in traffic department as well. “We can create a mechanism through AI to manage traffic jams. Smart Cities project under Digital India initiative is one such sector where AI can be used effectively. The government is slated to invest INR 2 lakh crore in Smart Cities project which deals with humongous data. Gujarat is one such state where over 50 per cent of people live in urban clusters where this technology can play a major role in improving citizen services,” he affirmed.

During the panel discussion titled “Responsible AI with the inclusive approach: For urban-rural and people with disability”, opening panelist PV Mohan Krishnan, Deputy Director General, NIC Gujarat, said that AI is not a monolithic thing that can be interpreted in one way. He further explains the use of AI in judiciary by giving an example where presently they are looking at translating complex judicial phrases from English to other languages. Even sentence constructs will require AI interventions. The government is also using AI in simplifying the documentation services such as caste, birth, and death, BPL certificates through Digital Gujarat. There are many routine rule based approvals given which can be amenable to AI intervention and quicken the process, the DDG adds.

Another panelist, Nitin Tatu, DGM, Gujarat Informatics Limited pointed out that AI is a technology which is being embraced by the government slowly, but there is huge possibilities in different sectors in the government to bring out benefits for the citizens. AI can be used for various works like text, pictures or satellite imagery for the benefit of farmers and for the law enforcement. “As an instance, we have installed many CCTVs across the state, the live feed can be fed into servers and used to find out traffic violators to save significant man hours needed in the job,” he informed.

Rohit Mehta, Advisor, Department of School Education, Government of Gujarat, said that Gujarat’s education department is the biggest in India which has 54,000 schools, around 4.5 lakh teachers and 1.15 crore students. “Almost 51 per cent of the Gujarat Government employees are with the education department and around 19 per cent revenue budget is allocated to it. When you have such a huge manpower, if you do not use the data productively, the data collected will be humongous. The department conducts annual exams of 43 lakh students every six months and one can understand the massive data involved in the exercise. If the data is not used and analysed intelligently, it will not make any difference to the people’s lives.”