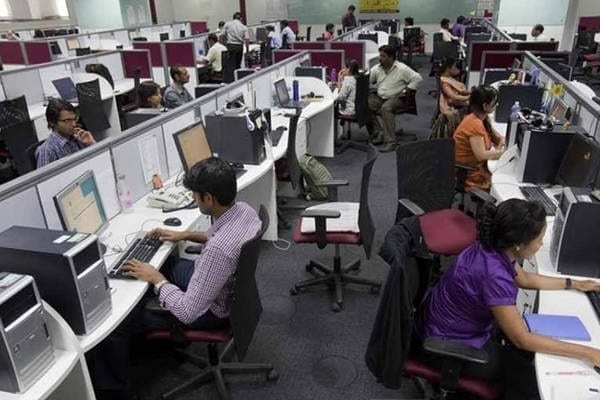 IT industry body National Association of Software and Services Companies (Nasscom) has projected a growth rate of seven-nine per cent in fiscal year 2018-19, slightly higher than the seven-eight per cent expected in the current fiscal, while hiring is expected to remain muted. In its outlook for the forthcoming fiscal, the industry body said that the sector continued to face various headwinds like increased protectionism, tax impact issues in US and sluggishness in technology spending. “We estimate a seven-nine per cent growth in IT and IT-enabled services for FY19. The domestic revenue may grow at a slightly higher pitch of 10-12 per cent while exports, the mainstay, may lag in FY19,” Nasscom President R Chandrashekhar said while addressing a press conference at the World Congress on Information Technology (WCIT). Nasscom had projected a growth rate of seven-eight per cent for FY18, and the industry is expected to close the year with a growth of 7.8 per cent.

On the hiring front too, there is unlikely to be any significant uptick as the sector is likely to absorb around one lakh people in FY19. “Hiring is expected to be similar to FY 2018 with technology jobs in non-technology sectors expected to grow faster,” Nasscom said. In the years prior to FY18, the industry added around two lakh people in a year. According to Nasscom, exports are projected to touch US$ 137 billion in FY19, up from US$ 126 billion in FY18. The projections by Nasscom reflect the growth rate of the Tier I Indian IT services companies such as Tata Consultancy Services, Infosys and Wipro, who have indicated a muted outlook.

The export segment of Indian IT has also been impacted due to slowing of spending by the BFSI sector, which is one of the largest revenue contributors for Indian IT services players. Nasscom reiterated the need to capture the value and impact across all components of the digital economy in the country. The vision to build a US$ 1-trillion digital economy by 2022 would require growth across all segments – established and new-age companies, technology service companies, product companies, consumer internet companies – and increased adoption of digital across enterprises, government and MSME in India. Last June, Nasscom had forecast a flat growth rate for FY18, after delaying the same by over four months due to visa issues in the US and other global headwinds.

“The year 2017-18 began on a muted note, but driven by a better growth in the second half of the year is expected to clock revenues of US$ 167 billion, representing a growth of 7.8 per cent for export revenues and 10 per cent in domestic revenues. The e-commerce sector is expected to grow by 17 per cent in GMV (gross merchandise volume) terms,” Chandrashekhar said.

According to Nasscom, 2017 started against the backdrop of uncertainties over protectionism, Brexit and a slowdown in technology spend decision making. “There is still some turbulence and it is not clear how some of the known uncertainties will play out. However, FY 2019 is likely to be a better year, based on our current assessment,’’ the Nasscom president said.

Nasscom said the industry continues to grow steadily to establish itself as a ‘Digital Partner’ to the world. It believes that the future of the industry lies in ‘Digital at Scale’ as global digital spending is growing at 20 per cent annually. The digital revenues grew at 30 per cent in FY18, demonstrating the base for a solid foundation in digital capabilities built by the sector. “It’s a great milestone for the software and services industry to cross US$ 150 billion — tripling in size in less than a decade. The growth of the B2B start-up sector also represents a unique opportunity for India to build innovative solutions for India and the world. However, what lies ahead is even more exciting. From small digital pilots, to POCs (proofs of concept) with product players, we are witnessing industrialization of digital as the wave ahead,” said Nasscom Chairman Raman Roy.

As per the outlook, the industry will further expand its digital footprint, with growth of seven-nine per cent in technology services, 10-12 per cent in domestic technology and new-age digital growth at 1.5-2x of industry growth. Growth of the Indian economy, rapid technology adoption and progressive policies are vital to accelerate job creation in the country, the body said.